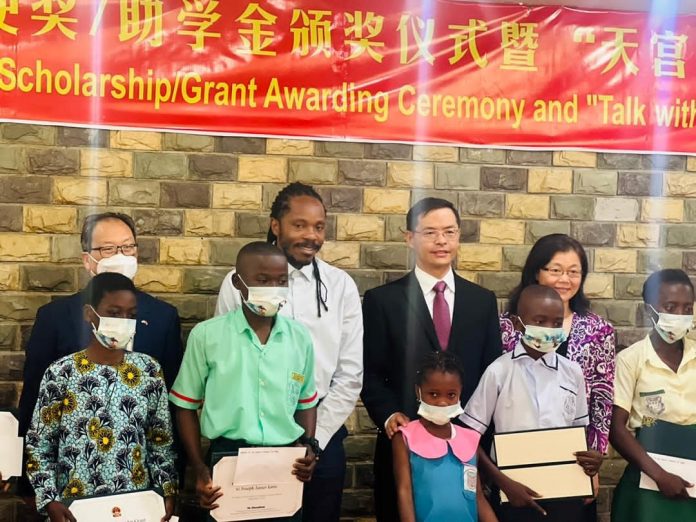 The Chinese Embassy in Sierra Leone has held an Awarding Ceremony for the 2022 Chinese Ambassador Scholarship/Grant and a “Talk with Taikonauts Event” at the Bintumani Hotel in Freetown.

He, on behalf of the Chinese Embassy and in his own name expressed sincere appreciation and thanks to Hon. Minister Wurie and Hon. Minister Sengeh for their precious support to the event.

He also thanked the Sierra Leonean Government and People, particularly the Ministry of Technical and Higher Education and the Ministry of Basic and Senior Secondary Education for their efforts in promoting educational cooperation between the two countries.

The Ambassador furthered how in recent years, the Chinese Embassy has been awarding Ambassador Scholarships to outstanding college students and grants to needy primary and secondary school students in support of Sierra Leone’s educational development.

He said currently, 20 college students and 108 primary and secondary school students will benefit from the initiative extending warm congratulations to all those who are qualified for the 2022 Chinese Ambassador Scholarships and Grants.

“To date, a total of 135 local students have benefited from the Chinese Ambassador Scholarships,” he revealed adding how the 20 college students for the Ambassador scholarships were recommended to the Embassy by the Ministry of Technical and Higher Education as well as various colleges and universities across this country.

He also disclosed that the 108 recipients of the Ambassador grants were recommended by the Ministry of Basic and Senior Secondary Education, Fourah Bay College Junior Secondary School and the Sierra Leone – China friendship organizations.

HU Zhangliang intimated that due to space limits, the Embassy invited only 10 representatives of the grant recipients to attend the awarding ceremony as the other 98 students will receive the grants soon.

The Ambassador said this year marks the 51st anniversary of the establishment of diplomatic relations between the two countries and talked of  how cooperation in educational development and human capacity building between our two sides are especially significant.

He said just in the past two decades, the Chinese Government has sponsored over 1100 Sierra Leonean students to study in China under various scholarship programs.

He said meanwhile, the Chinese Government has been supporting the Free Quality Education initiated by His Excellency President Julius Maada Bio in various ways, such as providing 2 million RMB yuan as direct financial support, providing computers and other teaching equipment to some local schools and providing thousands of tons of rice aid for the school feeding program etc.

The Ambassador stated how in February this year, the Chinese Embassy cooperated with the Ministry of Basic and Senior Secondary Education, the Confucius Institute of the University of Sierra Leone and the Sierra Leone – China Friendship Association in launching Small Small Chinese Lessons in five primary schools in Sierra Leone, offering opportunities of learning basic Chinese language skills to the students and helping bridge cultural distances.

The Ambassador informed all that after the awarding ceremony, they will be jointly witnessing a historic and most exciting moment i.e. “Talk with Taikonauts”, a program, which he said, was specifically arranged for their African young friends and it’s meant to share China’s experience and successes of space exploration with Africa and encourage Africa to build up its own great dreams.

He said the three Chinese Taikonauts who will talk with the African youth were sent into the Tiangong Space Station in June this year by Shenzhou-14 crewed spaceship.

The Ambassador said through the dialogue to be held shortly after they will be able to better understand the development of China’s space science and technology.

Both the Sierra Leone Ministers of Education expressed profound thanks to the Chinese Embassy in Sierra Leone and the Ambassador in particular for all the efforts that they made which culminated into what all is now witnessing.

They expressed optimism that the bilateral relationship between the two countries will continue to grow from strength to strength further admonishing the beneficiaries to make good use of the opportunities they have been given which others do not have access to.

Highpoint of the event was the expression of gratitude to the Chinese Embassy by the beneficiaries and their parents.