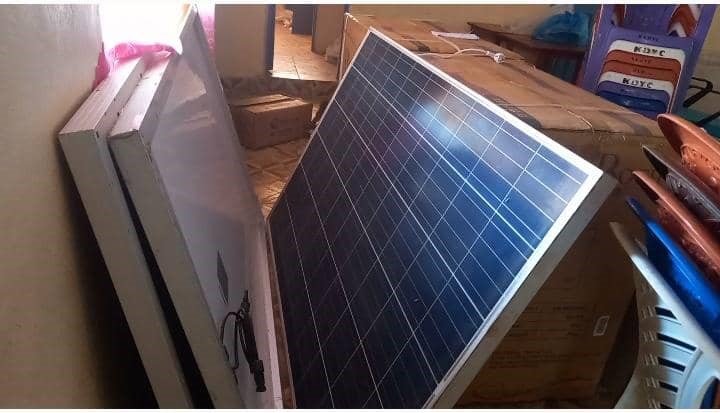 Fish pond, freezers, solar panels, water tanks and batteries among other things amounting to over 800 million old leones have officially been handed over to the youth of Kailahun district by the National Youth Commission with support from the UNDP and IOM.

On behalf of the youths and the people of Kailahun district, he appreciated the efforts of the Commission and partners for bringing such projects to their district.

He said the support will enable the youth of Kailahun district to engage in positive things and think about how to support themselves to run their programs.

He wished that the Commission will explore Kailahun district so that more of this fish ponds will be built in the district.

“It will not only help in giving protein and also give support to not only the youth but also the elders and the people of Kailahun district as a whole.

During the handing over ceremony Deputy Commissioner of the National Youth Commission, Emerson Kamara said the Commission and other sectors dealing with youth affairs like the Ministry of Youth Affairs have a huge task.

He said one of the main tasks is to provide the basic needs for the largest coaster of the Sierra Leone population; which is the youthful population.

“With support from our partners, we’re here today in Kailahun district to officially hand over the items for the fish pond”, he said.

He further stated that the introduction of fish farming in Kailahun district, will engage young people and help them make a better livelihood.

One of them he said is the United Nations Development Program (UNDP) under the Youth Employment and Empowerment Project – under the Local Economic Development Portfolio.

He said the Project supports the youth with a fish pond that has been established, adding that it also provides items like freezers, solar panels, water tanks and batteries among others.

Jinnah Arunah Kphunleh, Kailahun District Youth Chairman, expressed gratitude on behalf of Kailahun district to have received the items for the fish farming.

He also promised on behalf of the district that the items that have been given to them by the Commission and partners will be used judiciously and for the intended purposes.

He further assured the Commission that as young people, they will make proper use of these facilities.

Mohamed Sesay, is the Regional Coordinator of the East National Youth Commission, lamented how young people have been crying for support from donors and the government for a long time; so he sees this fish farming opportunity as a plus for young people in Kailahun district.

“I hope that they will make good use of this opportunity, so this will convince other partners to give more support,” he stated, while extending thanks and appreciation to the Commission and their partners for considering Kailahun district to benefit from the fish farming project.