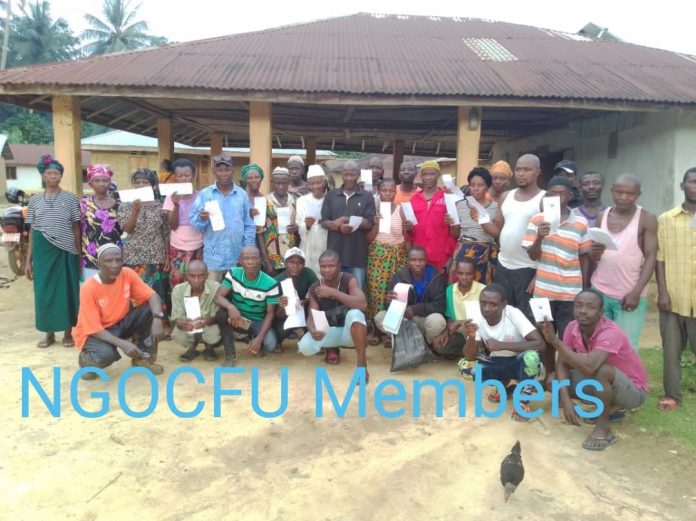 By Paul Lamin in Kenema

A farmer base organization Ngoleagorbu Cocoa Farmers Union (NGOCFU) has dished out cash in the form of Fair-trade Premium to registered farmers doing business with the organisation.

The cash distribution attracted farmers, chiefs and women from different towns and villages who converged at the Niawama community in the Guara chiefdom Kenema district for the distribution exercise.

The Chairman of the Ngoleagorbu Cocoa Farmers Union Foday Brima said a larger chunk of farmers have registered with the organisation so far and will receive the Fair-trade premium (profit) based on individual sales of cocoa to the organisation.

He said over 1,743 farmers registered with the Union under different Associations including MACFA, TUNCkOCFA & GACFA but only 600 have proved to be productive by supplying cocoa beans to the cooperative.

He maintained that those who supplied cocoa for the 2021 /2022 cocoa buying season are the only ones that are legible to receive the bonus based on number of Kilograms supplied to the union.

He further said that the premium is distributed according to the fair-trade standards in the following categories:

He said each farmer will receive an additional Two thousand Leones for each kilogram (Kg) cocoa they sold to the organization last season.

The chairman also said after receiving the monies farmers are expected to use the monies in the best way possible to improve on the quality and quantity of the cocoa so that they can attract more price at the fair-trade market.

Premium committee Chairman for the Ngoleagorbu Cocoa Farmers Union, Karifa Safffa said farmers received the previous year’s premium and used it to underbrush their cacao farms and this year’s premium will be used to develop their farms and for quality assurance of cocoa.

The chairman said a lot of farmers have joined the union over the years because of the transparent manner in which monies are distributed especially the premium benefits.

He said as farmers they have benefited a lot from this organization as they get the correct prices for their products even at village level. He called on other farmers within the forest edge communities of the Gola Forest to also join the Ngoleagorbu Cocoa Farmers Union NGOCFU for better price and other added benefits.

He said this year’s premium benefits amounted to Le 91 million after a total of 400bags were sold out last season. He stated that farmers have a larger portion of the money in the tune of 52% out of the total sum and the other percentage will distributed as planned by the premium committee.

Going further Mohamed Sama said bonus are only guarantee to farmers that sell cocoa to the organization during that season and farmers who remain loyal to the course of the organization in terms of business.

Mohamed Sama said the   distribution of this year’s premium was done at the Niawama community as the organization’s Headquarters. He said other communities will also benefit from the premium distribution within the other remaining chiefdoms.