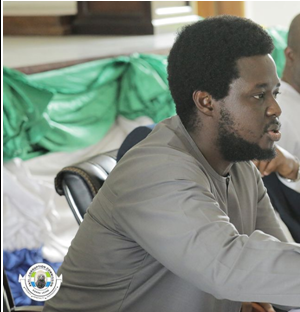 The Commissioner of the Anti-Corruption Commission (ACC), Francis Ben Kaifala Esq., after delivering the soul touching and inspirational Keynote Address to youths in Makeni at the jam-packed Auditorium,  drove to Magburaka where he had an engagement with eminent personalities of the University Court of Ernest Bai Koroma University of Science and Technology (EBKUST).

The meeting which was held at the EBKUST Secretariat Hall in Magburaka, Tonkolili district, North-East Region, discussed among other issues, complaints which had been filed to the ACC by some aggrieved students that their offers of acceptance to pursue various courses in the University were withdrawn, whilst persons/students in a similar situation with theirs were made to continue their courses.

In his statement to members of the University Court, Commissioner Francis Ben Kaifala underscored that the ACC is playing a support role to tertiary institutions, and therefore has asked the University Authorities to look into the matter first and afterwards the Commission will intervene and proffer expert advice accordingly.

The ACC Czar also addressed the Court on matters of examination malpractice and emphasised it was eroding the quality of our educational standard, noting that, it is unacceptable and should be curbed.

Mr. Kaifala explained that a student who engages in examination malpractice at the secondary school level will do so at University level and end up acquiring Fake Degree or Certificate, who will become a danger to society. A person who had got his qualification by fake means and becomes medical doctor will end up killing people, as an engineer that will build bridges and houses which will collapse, he averred.

In very clear words, Commissioner Kaifala denounced the issue of fake degrees and furthered that the more reason why the ACC was very concerned when the “Dominion issue” surfaced, and is doing something about it, contrary to some comments that the ACC said they had no business with such issues. ACC’s position is very clear. There are other institutions such as the Universities, the Human Resource Management Office, Ministry of Technical and Higher Education etc., to look into these issues first, and where there is a case of the person using the fake degree to confer Advantage on himself, then refer same to the Commission for action.

The Commissioner expressed gratitude for the cooperation between the University Authorities and ACC North East Office since receipt of the complaint. He furthered that it is within the role and purview of the University Court to take a decision on this matter.

The Commissioner advised that, it is in the discernment of the Court to allow them continued or not. But where they choose to allow them, the decision must benefit all of them, but where the reverse is decided on, it must equally affect all of them.

Earlier, welcoming the ACC Commissioner to the EBKUST, the Chancellor of the University, David Carew recognized the gains made in the fight against corruption under the leadership of Francis Ben Kaifala. He reiterated the University’s commitment to supporting the ACC in its effort to fight graft.

In his short remarks, the Vice Chancellor and Principal of the EBKUST, Rev. Professor Edwin J.J Momoh, thanked the Commissioner for accepting their request to address members of the University Court. Professor Edwin Momoh re-echoed the University’s resolve to partner with the ACC to ensure that the University is free of corruption and corrupt practices especially that relating to examination malpractice.

He assured the ACC boss of the Court’s commitment to promoting fairness and transparency in admission processes.

The University Court is collectively responsible for overseeing the University’s activities, determining its future direction and fostering an environment in which the institutional mission can be achieved and the potential of all learners maximized.