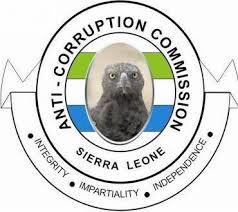 The Anti-Corruption Commission (ACC) Eastern Region office has engaged the hospital management of the Kenema Government Hospital on various corruption allegations, ranging from the proliferation of the free health care drugs in markets, to the illegal purchase and sale of “plumpy-nuts” meant for malnourished children, and the overall performance of medics in the discharge of their duties more especially at Peripheral Health Units (PHUs).

ACC’s Public Education Officer, Kenema, Jeneba Kemoh-Mbayo, while explaining the purpose of the meeting, threw light on the covert nature of the operations of the Anti-Corruption Commission. She said streaming calls from the public at radio programs speaks to the truth that somebody somewhere is responsible for the transaction of the free health care drugs. She however likened the illegal purchase and sale of “plumpy-nuts” to that of Marijuana.

Highlighting the ramifications of corruption within the health sector and the attendant offences, Senior Investigation Officer ACC Kenema, Belinda Hebron emphasized on Section 44 of the Anti-Corruption Act of 2008 as amended in 2019 as one of the mostly flouted Sections in the Act. Belinda Hebron reaffirmed the Commission’s commitment in making corruption unfashionable and a high risk enterprise.

Urging all nurses and doctors to maintain integrity in their daily operations, Public Education Officer ACC, Kenema, Edward Nathaniel Blake said integrity is simply defined as doing the right thing when no-one is watching you. Speaking on the conduct of nurses in their workplaces, Mr. Blake said reports gathered from Peripheral Health Units indicate that most nurses in these facilities spend most of their time out of their duty stations.

Dr. M.I Kapuwa, Medical Superintendent, Kenema Government Hospital, in response to the many allegations against the hospital, maintained that it is possible that some of these drugs and “plumpy-nuts” are coming from the their Peripheral Units as they have had similar experience in the past. Dr. Kapuwa said they have had a situation wherein stolen medicines were alleged to have come from the Kenema Government Hospital but what saved the day was the batch number on the box. He however admonished nurses and all present to desist from all forms of corrupt practices and uphold integrity.

Abibatu Abu-Mattia, Prevention Officer ACC Kenema, who chaired the meeting, told all present that customized meetings organized by the ACC are geared towards integrating anti-corruption values and principles in public sector institutions, for improved and effective service delivery.

Questions bordering on gifts before and after service and many more on the offences formed the high point of the engagement.