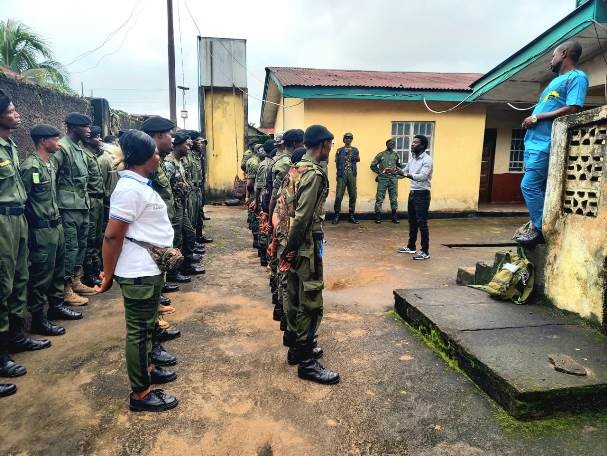 The Anti-Corruption Commission (ACC) Kenema Office has held its maiden engagement with the National Protected Area Authority (NPAA) in a customized meeting during their regular muster parade in Kenema on general anti-corruption issues.

Speaking on the purpose of the engagement, Edward Nathaniel Blake, Public Education Officer (PEO) ACC-Kenema said, meetings of this nature are designed by the Commission to help curb graft in Government institutions. He however allayed the fears of the RANGERS that the Public Education and External Outreach Department is the friendly face that serves as one of the preventive arms of the ACC. He also stressed on the need to uphold integrity in their daily work as ignorance of the law is no excuse when it comes to the execution of the mandate of the Commission. He further brought to their attention that the ACC has received series of complaints on the conduct of RANGERS and investigations are set to commence soon.

Laying bare the various corruption offences as enshrined in the 2008 Anti-Corruption Act as amended in 2019, Senior Investigations Officer, ACC-Kenema, Belinda Hebron admonished the RANGERS that complaints filed against the NPAA ranges from soliciting, accepting or obtaining advantage contrary to Section 35 of the ACA 2008 as amended. She anchored on the their mandate, which is primarily based on protecting forest reserve and wildlife, but however noted that there are illicit or illegal cutting down of trees for both charcoal and timber purposes. She further warned against such practices, noting that it is a recipe for corruption and which usually affects both the giver and the receiver.

Bockarie Kowa, one of the NPAA Regional Coordinators started off with the slogan of the RANGERS, which is “One go, all for go” meaning unity in their work. The Coordinator disclosed that the visit of ACC was timely as there have been gaps in their operations in the region. He maintained that most of the RANGERS are non-literate so the tendency for them to act or behave differently has been eminent. He however assured the ACC Team of a complete change in their approach towards work and promised they will start to behave in the generally acceptable manner.

Reaffirming their commitment most especially in the area of illegal cutting down of trees, Sullay Mohammed who is also the Coordinator/Commander, NPAA, in the Eastern Region said, they are going to embark on what he referred to as “operation clamp down on timber loggers” in the East.

Concerns as well as questions from the RANGERS stemming from the non-availability of working gears, office equipment to non-payment of allowances formed the high point of the engagement.