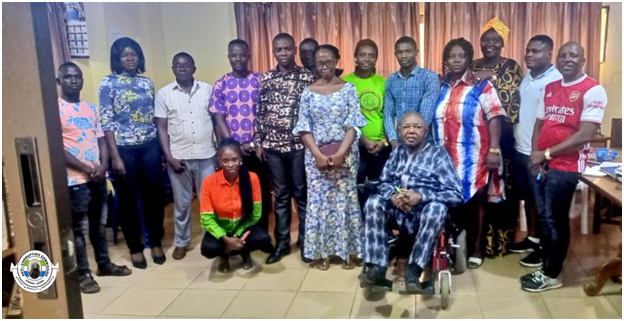 A four-man delegation from the Ghana Anti-Corruption Coalition (GACC), has through their Partner, SEND Sierra Leone on Friday 5th August, 2022, paid a working visit to the Anti- Corruption Commission (ACC) Regional Office in Kenema.

Ghana Anti-Corruption Coalition and SEND Sierra Leone, are key partners in implementing a project focusing on procurement and service delivery in the Health and Education sectors, in which the ACC plays a pivotal role in ensuring that transparency and accountability are mainstreamed as best practices.

The delegation from Ghana comprised the Executive Secretary, Head of Programmes and two Communication Officers.

Welcoming the team, ACC Regional Manager, East, Keifala Koi, on behalf of the ACC Commissioner, Francis Ben Kaifala Esq., registered his delight over the Team’s visit to the Office and assured them that the meeting will be very interactive.

He thanked the delegation for their visit and stated that the meeting is worthwhile and highlighted the general work of the Commission in implementing anti-corruption policies in the Health and Education Sectors.

The Regional Manager also explained the work of the various Units in the regional office with special focus on the Prevention Unit, which ensures that corruption opportunities are eliminated in procurement processes with the view that public sector institutions adhere to applicable procurement rules and regulations.

Speaking on the purpose of the meeting, Advocacy Advisor, Wurie Kargbo of SEND Sierra Leone said, the visit focuses on learning and sharing sessions on the operations of the ACC at regional level and to also evaluate a survey which was conducted in the Western Area and Kenema district. The project is titled, “Uniting Constituencies to Fight Corruption in Health and Education in West Africa”. He added that, their visit is to attract the ACC to look into the procurement process in these two institutions as the ACC is the lead agency to curb corruption in Sierra Leone.

In her statement, Executive Secretary, , Beauty E. Narteh said, anti-graft agencies are not fighting the menace for their personal interests and the fight cannot be fought by anti-graft staff alone but, through the collaborative efforts of all citizens.

She further explained the operations of the GACC and mentioned that they are also seriously immersed in Civic Education as they have similar mandate to educate the public on the dangers of corruption and the benefits of its successful elimination.

She furthered that the GACC has signed Memoranda of Understanding with accountability institutions in Ghana.

Concluding, she emphasized on the difficulty anti-graft agencies are faced with in fighting corruption especially in regard the attainment of the evidential threshold to prosecute cases investigated. While direct evidence may not always come by, circumstantial evidence could help, despite the fact that, some people would always tend to destroy same.

Head of programmes, GACC, Brick K. Sowu, said the project is being implemented in three countries namely; Ghana, Sierra Leone and Benin. He said the learning and sharing exercise with the ACC is a very fruitful one.

Mr. Sowu further said that, in terms of legislation, the GACC maybe ahead of the ACC but in terms structure, performance and delivery, the ACC is way ahead of them. Mr. Sowu furthered that, in their meeting with the National Public Procurement Authority (NPPA), he learned that anti-corruption policies are mainstreamed in NPPA operations and activities.

He mentioned Commissioner Francis Ben Kaifala as a case study, because his passion, dedication and willingness is clearly manifested in the work being done by the ACC Eastern Regional Office. He concluded that he is extremely impressed with the work at the regional office and encouraged staff of ACC-Sierra Leone to keep up the good work.