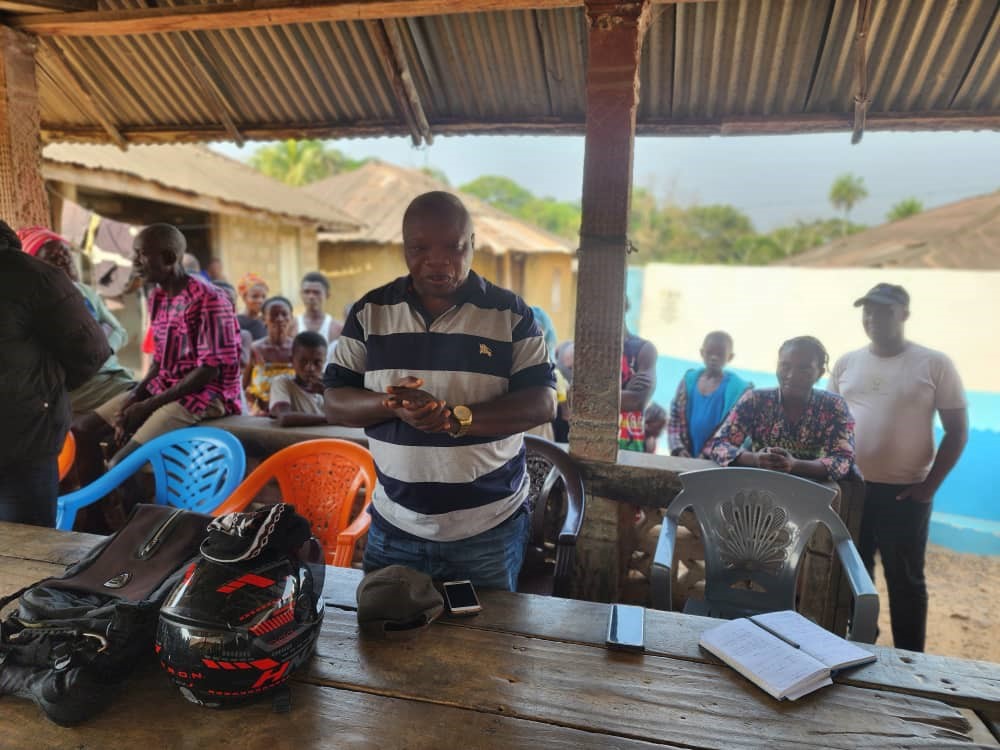 The first trance payment under the 2nd Cohort, which targeted 36,000 beneficiaries in 8 districts, provided unconditional cash of NLe1,309 or Le1,309,000 to the 2nd batch beneficiary households in December 2022.

After every successful payment cycle, the ACC follows up with strings of post-payment monitoring in all payment communities, aimed at spurring beneficiaries and stakeholders to freely discuss with ACC personnel, the challenges, grievances, and complaints from the last payment.

Addressing a jam-packed Barry in Komende Luyama, Small Bo chiefdom in the Kenema district, Deputy Commissioner of ACC, Augustine Foday Ngobie told beneficiaries and other community stakeholders that the leadership at the ACC does not believe in armchair monitoring.

“I have to see for myself and interact with you, our esteemed beneficiaries. What are your concerns, grievances, and complaints? Let us talk about them here. No one will be intimidated for speaking their mind. We are in this to ensure the monies given by the government, World Bank, and others reach the intended people without any hindrances. The desire is to better your socio-economic situation and nothing more. No one should demand or extort from you. If it happens, let us know”, the deputy commissioner said.

He went on that though the ACC has District and Community Monitors on the ground scoping for information on any suspected corruption, he has joined them to ensure that the right things were done on the ground without hindrances.

“We are in this for you, for us, and this country. We must together win the war against corruption and make this place the heaven we wish for. Corruption anywhere, regardless of the amount involved, is a threat to our collective survival. Where corruption thrives, no one wins, not even the corrupt”, he stated.

The Town Chief of Komende Loyama, Chef, Mustapha Bockarie Tejeh, welcoming the ACC team, expressed delight in seeing them at work for his people in such a fashion.

He stated that the presence and vigilance of the ACC have helped maintain the high integrity and success of the SSN project.

He urged the ACC to continue serving people and saving this country. He encouraged his people to feel free to communicate their grievances as he assured them that there will be no reprisal against them.

Several concerns were expressed by the audience, especially the beneficiaries, to which the deputy commissioner and team responded adequately.

The deputy commissioner will have similar engagements across the payment communities as he continues to lead the process by example.

It could be recalled that the roll-out of the Grievance Redress Mechanism (GRM), which is superintendent by the ACC, has at its core, a tripartite monitoring machinery of the entire Social Safety Nets Cash Transfer Project.

The ACC, through a well-established system that has seen it recruit and deploy District and Community Monitors across all Districts in Sierra Leone, has been and shall continue to scrupulously monitor.

Firstly, the identification, registration, administration of the LPMT questioners and ultimate enrolment of all successful beneficiaries, to ensure fairness, accountability and transparency.

Secondly, to monitor the physical cash transfer itself to ensure beneficiaries are paid their due without hindrances and possible corruption allegations, and

Thirdly, embark on post-payment monitoring after every payment cycle, during which social accountability town hall meetings are held across beneficiary communities and people are encouraged to feel free to talk about any grievances, complaints and or concerns.