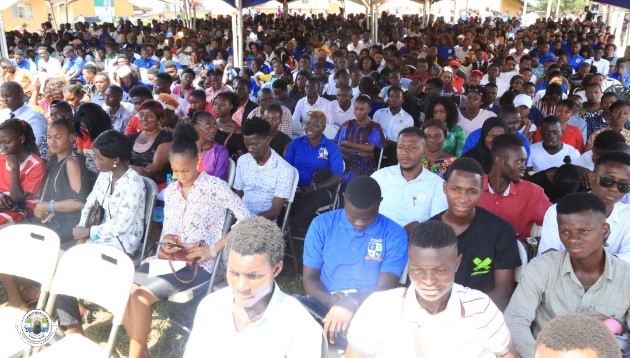 By Alex A. Bah

In its efforts to tackle corruption through its preventive approach–radical public education, the Anti-Corruption Commission (ACC) has engaged and shared integrity values with over 4000 freshmen of the Milton Margai Technical University (MMTU), at the institution’s orientation ceremony, for the 2022/2023 academic year.

The engagement took place at the University’s Amphitheatre, Goderich, Freetown.

Addressing freshmen at the engagement, Head of the Outreach Unit, ACC, Musa Jawara started off by informing the students that academic malpractice in all its forms is a criminal offence and upon conviction would attract punitive sanctions, such as, a fine of not less than fifty thousand Leones (News), or jail term of not less than five years.

He highlighted the many instances of corrupt activity within universities, such as leakages, cheating, submission of concocted certificates for admission, sex for grades among others.

“Students are the common factor in all forms of malpractices, and they consequently bear the greatest responsibility”, he emphasised whilst charging the students to desist from any such abhorrent scheme.

He also admonished lecturers of the university that as duty bearers they are bound to be the best possible model for students. He informed them that drawing of impossible questions or such not taught, coupled with abandoning of their classes are practices that the Commission strongly frowns at, adding that, salaries are not given, but earned.

Mr. Jawara further highlighted the dangers of these anomalies, stating that, it will suppress a person’s opportunities, dent an institution’s reputation and also prevent the county from having quality human resource needed to foster growth and development.

“When people are able to acquire quality education, they can break the cycle of poverty. Education therefore helps to reduce inequalities, and to reach gender equality”, he underscored whilst highlighting the many benefits of an integrity-driven learning system.

He encouraged them to support the fight, by reporting corrupt activities to their authorities, and direct same to the ACC, if the authorities are not responsive to those reports.

Earlier, the Acting Deputy Vice Chancellor Dr. Mohamed Alie Jalloh, welcoming the ACC, commended the efforts made in raising awareness on corruption and taking the fight to various institutions.

He noted that the present leadership of the ACC has increased and heightened the needed consciousness of the Sierra Leonean populace on corruption.

“When students have the proper orientation on what corruption is and the corresponding penalties, it will help in addressing this menace. It’s a must that they should imbibe the culture of probity and good citizenship”, he averred.

He ended by assuring the Commission of his institution’s unwavering support and commitment to the anti-corruption campaign.

Public Relations Assistant ACC, David Yusuf Kabia, in his short delivery, updated the students on the activities and positive strides made by the Commission, in tackling corruption.