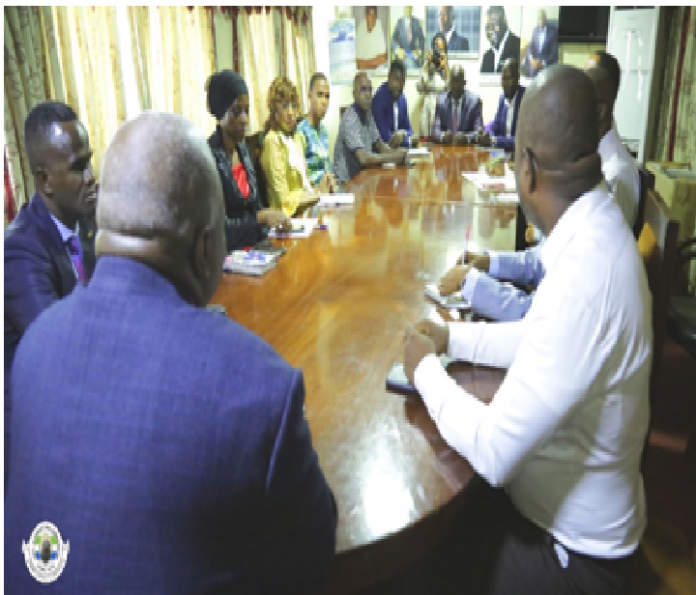 The delegation comprising other eminent officers of the Agency is in Sierra Leone for a week to understudy the operations of the Commission, especially its core operational departments like Public Education, Report Centre, National Anti-Corruption Strategy, Prevention, etc, that have been very effective and robust tools in the fight against corruption.

Stating the purpose of their visit at an inception meeting, the Deputy Executive Secretary of NACGGPA, Mr. Mohamed Konate disclosed that based on the feedback received from their Boss (the Executive Secretary of the NACGGPA) and Colleagues who had previously visited the ACC-SL in November 2022, and wanting to learn more from the wealth of meaningful experiences of the ACC, they were in Sierra Leone again to learn.

He stated that they were thrilled with the Commission’s internal systems, practices, and strides that have been yielding huge successes to the admiration of many.

He continued that the week-long working visit was to provide them with sufficient insights and real-time experiences on the operations of the Commission, and how it has been able to cascade its very successful community sensitisation and media campaigns, which they intend to use to strengthen theirs.

Mr. Konate furthered that though Guinea was passing through its own share of difficult moments, but that the Presidential will to fight corruption supersedes the difficulties faced.

“Since we started work, we have conducted many missions and we want to complete them and ensure that they work effectively before and after the transition that our nation was going through, which necessitated our visit to the ACC-SL since both institutions share similar objectives” he said.

In his statement, ACC’s Deputy Commissioner, Augustine Foday Ngobie, expressed appreciation to the delegation for yet again choosing the ACC-SL for a study visit as both countries share a lot in common, historically, geographically, culturally, economically, etc.

He assured the delegation of the Commission’s unwavering commitment to share experience and collaborate with them on particularly its Public Education structures which has been one of the reasons behind its success.

“We want to assure you that we will give you insights on our operations, as we have been doing to others who have previously come to shave knowledge and information on how we have been able to go this far in the fight against corruption”.

He furthered that public awareness, integrity, and a vibrant and robust leadership, have been at the bedrock of the successes recorded by the Commission in the anti-graft campaign.

The Deputy Commissioner furthered that the mandate of the ACC as provided for by the Anti-Corruption Act 2008 as amended in 2019, is to use a tripartite tool in its anti-graft campaign. These tools are; Public Education, Corruption Prevention and Intelligence and Prosecution, all of which play different roles.

Mr. Ngobie noted that the Presidential will to fight corruption, manifested by the President of the Republic of Sierra Leone, has been a great source of inspiration and support so far in this journey over the years.

He therefore encouraged the Deputy Executive Secretary and his team to take notes, as the Commission will provide them with the required information and support by them to arm them in setting up a strong and robust Anti-Graft agency in Guinea.

It could be recalled that, sometime last year, another delegation from Guinea headed by the Executive Secretary, Saikou Amadou Diallo, had also paid a study visit to ACC-SL to also understudy the general operations of the Commission in the last four years, so they can replicate them in the anti-graft institution in Guinea.

The delegation which will be here for a week, will be having detailed fact-finding and experience-sharing engagements with the heads of the different Heads of respective Departments and Units to understudy their various activities and roles.

They will also be visiting other sister institutions that perform similar functions to promote integrity and accountability.