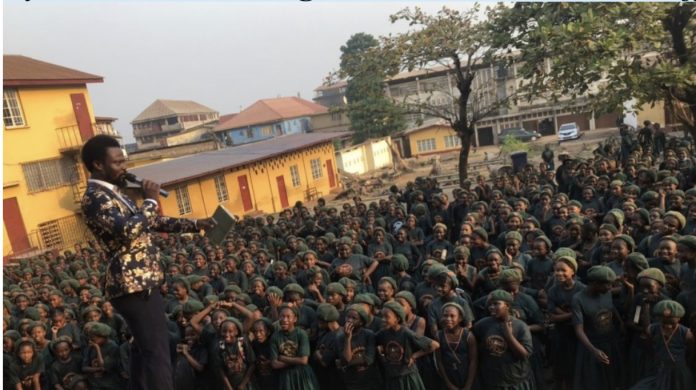 The Public Education and External Outreach Department of the Anti-Corruption Commission (ACC), has on Friday 4th February 2022 kick started its quarterly “Meet the Schools Campaign” in schools across the Western Area.

The first school engaged was the Annie Walsh Memorial Secondary School. The rationale behind the campaign is to “catch pupils’ minds attention and attitudes young” and make them ambassadors in the fight against corruption.

As the old adage goes, “train-up your children the way you want them to grow, so when they grow old they will not depart from it”.

It is against this backdrop that the ACC is embarking on a drive to enlist school pupils in the anti-graft crusade and guide them to develop the moral values of integrity, transparency and accountability, which will in turn give rise to a breed of public servants with sound moral and ethical values in the near future.

Among the many things discussed during the Campaign were to ‘educate pupils on the ills of corruption and the benefits of having a corrupt free educational system and the dangers of sex for grades and examination malpractices.

In this regard, Communications Officer Martina George, admonished the pupils to always reject and resist corruption in all its form within and out of the school setting. She also stressed on the need for pupils to always frown at all forms of examination malpractices, which includes sex for grades.

She said such practices must stop as they will have an adverse effect of the overall growth of a child.

In the aspect of galvanising students/teachers participation in the fight against corruption, and encouraging them to develop the culture of reporting suspected instances of academic malpractices and other forms of corrupt practices, Bernard A. Kargbo, Public Education Officer stressed on the importance of whistleblowers and the protection they will enjoy for assisting the Commission.

He was also quick to inform pupils that failing to report instances of corruption is not only harmful in the fight against corruption but also a disservice to the State as it was their civic duty.

He also encouraged pupils to always report corruption using the toll free line (515). He also reiterated the use of the three ‘Rs’ in the fight against corruption, which are Resist, Rejectand Report.

In his closing statements, he briefly explained about Assets Declaration process, its importance and benefits to the anti-corruption drive and the accompanying consequences of failure to declare at the stipulated time.

He encouraged teachers who are in grade 7 and above or who even are below grade 7, but perform fiduciary responsibilities to declare their income, assets and liabilities, as ignorance of the law is no excuse.