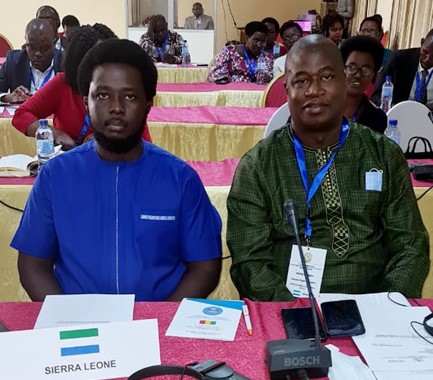 The Anti-Corruption Commission (ACC) wishes to inform the general public that it has been investigating multiple criminal syndicates that have been scamming some members of the unsuspecting public in and outside Sierra Leone, using the names of highly placed public officers. By that criminal enterprise, they have been successfully extorting huge sums of money from innocent people by making false claims to assist them or their loved ones travel overseas.

This investigation was necessitated by many members of the public filing complaints against unsuspecting public officers and they have been claiming that the officers have fleeced them.

Preliminary investigation by the ACC has established that, the criminal gang is peddling the names of; the Hon. Chief Minister, Jacob Jusu Saffa, the Attorney General and Minister of Justice, Mohamed Lamin Tarawally, the Minister of Foreign Affairs and International Cooperation, Professor David J. Francis, the Minister of Mines and Mineral Resources, Timothy Kabba, and the Deputy Minister of Internal Affairs, Lahai Lawrence Leema.

Furthermore, the investigation has established that, members of this criminal enterprise contact members of the public (their victims) through WhatsApp phone calls or Facebook, and represent themselves as one of the aforesaid persons, or their close associates, and narrate false plans or programs, to assist them, such as, that there is a Free Government Scholarship which one can benefit from by making payments for passports, accommodation, visas and tickets fees, and that once they make payments to cover the costs of the passports, visas, etc., they or their loved will get the scholarships. Once payment is made, the victims would then realize that the recipients are either any longer responsive or they become aggressive and start issuing threats or invectives against the victims.

The investigation has also established that a good number of persons living in and out of Sierra Leone, particularly the United States of America (USA), have been scammed by these criminal operators, by promising to unite them with family members and those victims living overseas cooperate and have paid to them huge sums of money believing that such nefarious activities are being carried out by the afore-named Government Officials.

The public officers’ photos are used on their profiles and social media handles and the impersonators find ways to be convincing in their communication and manipulation.

Several Scorpion squad raids across Freetown led to various arrests and confessions. Some are currently in custody helping the Commission with the investigation.

The ACC informs and advises the Public that such criminal activities are being perpetrated by a known scammer who is currently residing in Nigeria and directs every move from there. We therefore advise members of the public, in and out of Sierra Leone, to be careful and mindful of such scammers and make sure that they verify anything whatsoever they intend to engage in and avoid making payments to alleged public officers using social media platforms or even through direct calls.

There are legitimate means to verify such claims and they should be instead used.