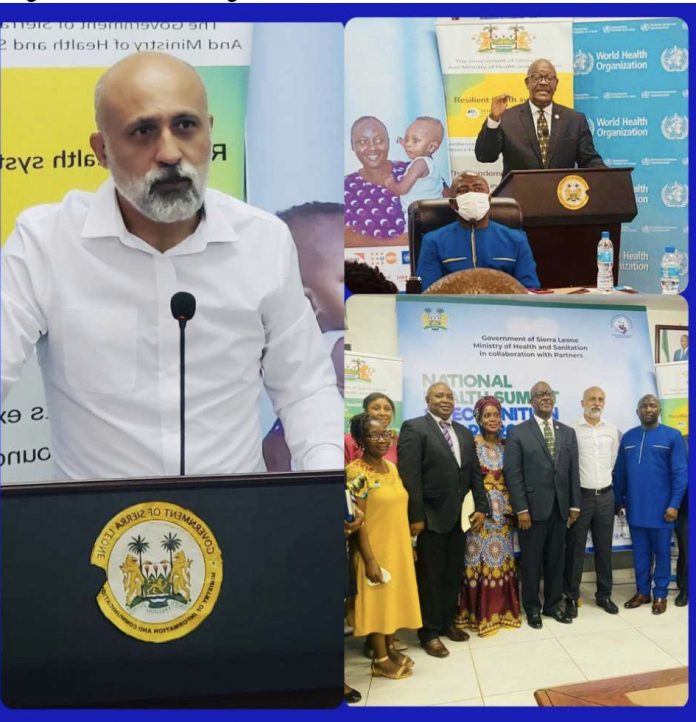 During the launch of the National Health Summit & Recognition Award 2022 with the theme: “Transforming Health Care Delivery Toward Universal Health Coverage” at the Ministry of Information and Communications Conference Hall at Youyi Building on Brookfields in Freetown, it was revealed that it will hold on 7th, 8th and 9th April 2022 at the Bintumani Conference Centre in Freetown.

Managing Director of Africell Sierra Leone, Shadi Gerjawi said Africell was particularly attracted to the theme for the Summit which is: “Transforming Health Care Delivery toward Universal Health Coverage”, adding that in the telecommunications industry the theme has terminologies that are commonplace which they utilise in terms of setting their yearly targets.

He maintained that they are driven by the quest to ensure communication is accessible to the most remote communities in the country and in all of this, they see Africell as a strategic development partner that has provided the requisite tools which the Ministry of Health and Sanitation has utilised and will continue to make use of.

The managing director stated that Africell has, “Support to Health” as a key CSR pillar and that is why they were amongst the first responders to provide the much-needed support when an unfortunate disaster occurred referencing the November 5 fire disaster at PMB junction, Wellington, where in its wake they provided food and medical supplies to the victims that were admitted at Connaught Hospital in Freetown.

“In providing access to communication and Universal Coverage, the company is involved in an extensive coverage expansion drive connecting thousands of communities nationwide. These communities when connected will be able to seek health-related information by going to Community Health Centers (CHC),” he revealed.

He suggested that the Government of Sierra Leone and its development partners can eliminate fraud and ghost beneficiaries among the service delivery infrastructure by utilising the AfriMoney platform to pay their workforce or beneficiaries, adding that as they continue with their expansion, and as the Ministry of Health and Sanitation works towards transforming health care delivery to achieve universal health coverage, it is important to note that as a private sector partner, their expansion cannot be done in isolation. It would require a concerted effort from the Government of Sierra Leone, development partner, and other private sector players.

He pointed out that these possibilities are all geared towards ensuring that as a sector leader they continue to lead with seamless transformation, prompt delivery, and un-segregated access to their services through universal coverage saying together they can reach the unreachable, deliver and serve the people and Nation of Sierra Leone.

“I wish the Minister of Health and Sanitation, Dr. Austin Dembyand his team all the best as they prepare to host what will arguably be the largest and first ever health summit in Sierra Leone to determine from the workforce on the ground how to successfully Transform Health Care Delivery Toward Universal Health Coverage in Sierra Leone. You can count on Africell for technical and branding support before and during the summit,” he concluded.

The Summit will end with an award ceremony to recognize the efforts of outstanding staff, facilities, partners and individuals in the health sector. The Health Summit will be divided into 3 stages; Pre-summit Summit which shall be held few days (around 31 March 2022) before the Summit to discuss presentations, the process and possible issues of contention that can derail the Summit if not addressed,” he added.