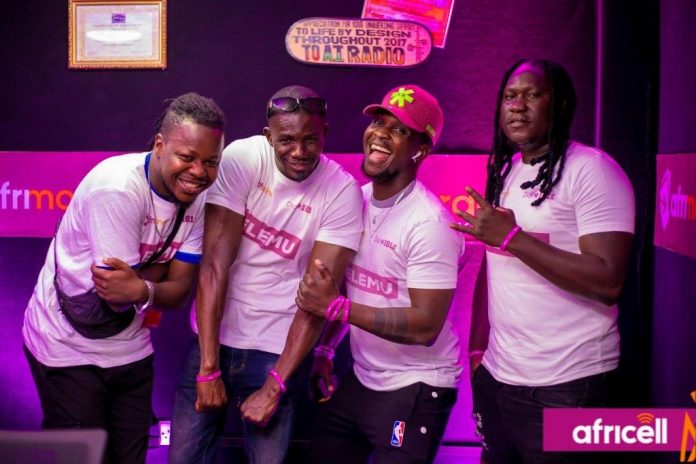 As part of their move to keep their customers abreast with their services and promotions, Afrimoney has on Thursday 15th September 2022, launched their LELEMU song at Afriradio.

It could be recalled that earlier last month, Afrimoney released an advert informing the public about their various offers with the slogan ‘LELEMU,’ which lure the attention of all and sundry.

Thereafter, the ‘LELEMU’ word is now the new slang that is commonly used by   all Sierra Leoneans and even foreigners.

According to the initiator of the ‘LELEMU’ word, Mr. Tamba Bee, the aforementioned slogan can be used in many ways based on the circumstance it is used. Tamba Bee added that the LELEMU chant will soon be followed by another catchphrase just to put a smile on the face of their subscribers.

Speaking during the launching ceremony, the Media Director of Africell, Mr. John Konteh said they decided to launch the LELEMU song due to the various questions members of the public have been asking about the meaning of ‘LELEMU’.

John Konteh furthered that the essence of the song is to see how best people can vibe to the song and be informed about the various Afrimoney offers by dialing *161# on any Africell number.

John Konteh continued to inform members of the public by stating that, after the launching of the LELEMU song which was done by housemates Eddie of 441 fame, Karafilo and M’posh, the public has been ‘vibing’ to the song. He added that, the ‘LELEMU’ song is now making its way in night clubs, pubs, restaurants, radio stations and even on various media platforms.

John Konteh said that on Friday the 16th September 2022, Afrimoney will be having a massive float parade within the Western Urban and Rural Areas with the motive of spreading the love messages and goodies to the people of Sierra Leone.

“We will be spreading the love across the country,” assured John Konteh, adding by craving on the indulgence of all and sundry to be part of the Africell/Afrimoney family. He further added that, with Afrimoney lots of goodies are install for the people of Sierra Leone. He concluded that the satisfaction of their subscribers is ought most desire.