One of the leading mobile financial service providers in...
Business

Africell Sierra Leone in collaboration with Samsung has on...
Business

By Aruna Turay Pursuant to Section 122(2) of the Banking...
Business

By John-John Whitfield Afrimoney is a mobile money solution offered... 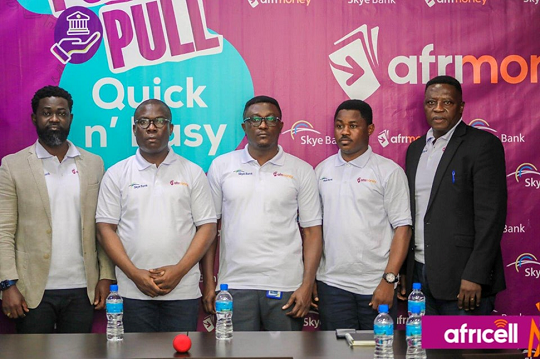 Afrimoney, an appendage of Africell Sierra Leone and Skye Bank Sierra Leone have unveiled the ‘Bank To Wallet and Wallet To Bank’ Service (Push & Pull Service) during an auspicious event held at Skye Bank Boardroom on Rawdon street in Freetown.

Managing Director of Skye Bank, Abiola Bolaji said as a Bank they are excited to collaborate with Afrimoney to launch the Bank To Wallet and Wallet To Bank service which he described as historic, adding that the launch means they are turning another corner (achieving another milestone) in their digital aspirations as a bank.

She expressed appreciation to Afrimoney for the partnership describing it as a great deal for the people of Sierra Leone and especially people in remote communities where banks are not existing adding that the bank currently has five branches in the country, four in Freetown and one branch in Bo.

The managing director said that in order to serve their valid customers easily and affordably the bank has introduced internet banking platform to host all their customers, adding that in order for the bank to do more they need to leverage on the growth of the use of internet in the country.

He revealed that in terms of financial inclusion there are about 12.4 % of Sierra Leoneans that are financially included, stating that such shows that only 12.4 % has a bank account of which he said with the launching of the ‘Bank To Wallet and Wallet To Bank’ Service (Push & Pull Service) those unbanked in the remote communities will be catered for through Afrimoney.

Abiola Bolaji revealed that the platform will enable their esteemed customers to conduct financial transactions securely and efficiently without going through the normal hassle of queuing in the banking hall but can conduct transactions within their comfort zones at any time by using their mobile phones.

Director of Afrimoney, Martison Obeng-Agyei, expressed how excited they are to announce the launch of the Bank to Wallet, Wallet to Bank service partnership in collaboration with the Skye Bank.

He further informed all that from subscribers’ Afrimoney accounts they can be able to check their bank account balances.

He disclosed that subscribers should just dial *161# then follow the instructions in order to do their transactions in an easy, safe and affordable manner.

The official launching of the Bank to Wallet and Wallet To Bank service was done by the Corporate Affairs Officer at Africell Sierra Leone, Joe Abass Bangura, the Director of Afrimoney, Martison Obeng-Agyei and the Managing Director of Skye Bank, Abiola Bolaji.