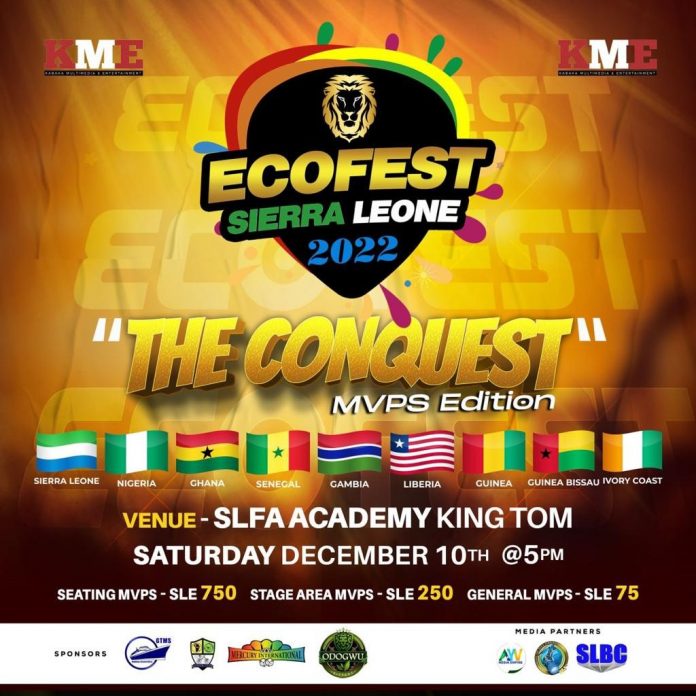 This year’s ECOFEST, which is titled: “The Conquest” will be held tomorrow Saturday 10th December at the SLFA Academy in Kingtom, Freetown.

CEO of Kabaka Multimedia Entertainment, Abubakarr Turay, popularly known as Kabaka the annual event which was first staged in 2019 and has grown to be one of Africa’s biggest entertainment shows, and people around the continent are getting more interested in it.

Kabaka said while it has been successful in bringing artists from all around the subregion, the challenges are equally burdensome, adding that one of the main challenges is getting sponsorships.

He said getting people to invest in this initiative is a herculean task, especially when many of those who can sponsor the show do not find it worthy.

Another problem is with security, people who are employed to make sure the event is successfully secured sometimes leave their duties to take pictures with the performers.

He added that there has also been an equally bigger challenge in getting people to understand what it means to build such a platform.

The refusal of Sierra Leoneans to support acts from within the country and heavy criticisms of every action and outcome of the show, continue to be obstacles he has had to surmount every single year. This year’s event will be graced by 9 international artists from the subregion. The foreign artists lineup includes, Ivorian singer, songwriter and producer, Kikimoteleba, Guinea’s hitmaker, Junior Barry, Gambian Afro-pop artist, Jizzle, Sengalese freestyle rapper, Samba Puezzi, Guinea Bissau’s finest, A.S One 1820, Liberia’s award-winning female rapper, MC Caro, Falz, and AV representing Africa’s entertainment giants, Nigeria, and the headliner from Ghana, Shatta Wale.

Previous article
Jimmy B Receives ZAFAA Global Award in the United Kingdom
Next article
January 7, 2023… Amb. Kao Denero to host Kaligraph Jones, in ‘Back to My Root’ Festival, at Tokeh Beach
News