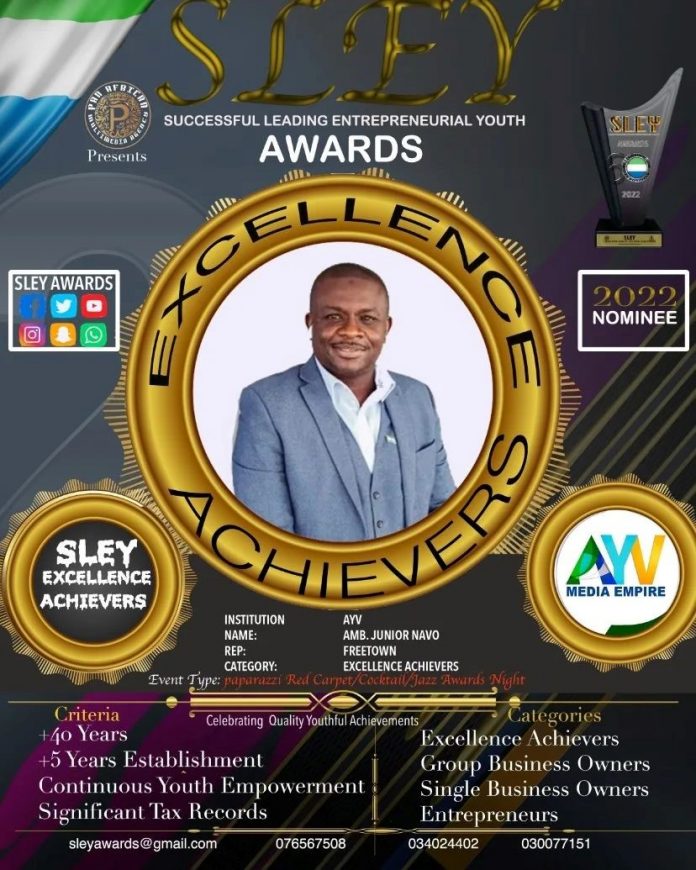 The name Junior Navo, as he is popularly called, is a household name in Sierra Leone. He is the Founder and Chairman of the African Young Voices (AYV) Media Empire which comprises newspaper, radio, television, printing press, films, charity foundation and media academy among other.

Through his investments, Ambassador Navo has offered jobs to many young people in and out of the country. Just recently, arrangements were finalized for AYV to be linked to DStv on Channel 399 and as at now its programmes on that channel could be watched in all African countries, with the exception of Nigeria and Ghana which will soon be on board.

Ambassador Navo is also a renowned member of the All Walks of Life (AWOL), considered to be one of the elitist social clubs in the country. The organisation, over the years, through its annual award events had recognised and honour distinguished personalities and outstanding institutions for accomplishing certain feats in life and impacting society positively.

AWOL has also been involved in humanitarian work by extending philanthropic gestures to deserving individuals, institutions and deepening national development.

The Awards celebrate quality youthful achievers of age 40 years and above, of over 5 years of establishment, continuous youth empowerment and significant tax records.

In a Press Release dated 9th September 2022 and issued by the Project Manager of SLEY Awards, Bullz Kamara, it was stated the Organising Committee of SLEY was set up in respect of the great works of active Sierra Leonean youths.

After a long-time research on successful businesses owned by Sierra Leoneans nationwide and abroad, SLEY aimed at discovering the most valuable governmental national partners in building a peaceful nation.

SLEY has finally discovered the great qualities in Sierra Leone youths encompassing their patriotism and contributions in dedicating their personal resources to nation building, creating peaceful communities through livelihood and job opportunities made available by them to their fellow youth within their reach.

The SLEY Awards is targeting different districts within Sierra Leone maintaining that it is a credible award put together by successful creative serious-minded professionals from all works of life aimed at identifying, recognising and projecting successful youth, who have been doing tremendous work to ensure that job opportunities are been given to the youths in their communities aimed at supporting government’s efforts at creating jobs.