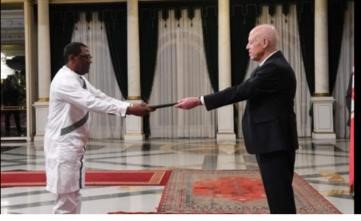 By Mohamed B. Kallon

Ambassador of Sierra Leone to the Arab Republic of Egypt accredited to Tunisia, Libya, Sudan, and Chad, His Excellency Sadiq Silla presented Letters of Credence formally accrediting him as the Non-resident Ambassador Extraordinary and Plenipotentiary to the Republic of Tunisia on Monday, 4th July 2022.

The Letters of Credence were presented to His Excellency Kais Saied, President of the Republic of Tunisia at the Presidential Palace of Carthage, Tunis, Tunisia. Ambassador Silla was amongst eleven foreign ambassadors to Tunisia non-resident.

The President of Tunisia also accepted the Letters of Credence from Ambassador Sadiq Silla on behalf of the President of the Republic of Sierra Leone.

Expressing gratitude to the president, Ambassador Silla conveyed the warm greetings and kind wishes of President Brig. Rtd. Dr. Julius Maada Bio of the Republic of Sierra Leone and emphasised that he would not spare efforts to raise the level of cooperation to a qualitatively new level.

During the presentation ceremony, discussions centred on strengthening relations and dialogue between the two countries and iteration of commitment towards maintaining mutually beneficial relations within multilateral platforms.

Ambassador Silla expressed Sierra Leone’s commitment to working with Tunisia on these shared goals and expressed hope that the country’s long-standing relationship would be strengthened the process of integration of the African Continent, by extension consolidation of the African Union which underlines their common objective and desires to succeed together. President Saied of Tunisia and Ambassador Silla are pictured at the presentation ceremony.

Earlier this day, Ambassador Silla submitted the copies of his Letter of Credence as Ambassador accredited to Tunisian to the Tunisian Minister of Foreign Affairs, Migration and Diaspora Affairs Othman Jerandi.

The discussions that followed the ceremony matters on enhancement of the bilateral relations between Sierra Leone and Tunisia. Ambassador Silla thanked the Tunisian Government for the cooperation and efforts to keeping peace.

In return, Minister Jerandi wished Ambassador Silla success in his work as the country’s representative. He assured that the Tunisian MFA is ready to provide all the necessary conditions to enable him to perform his duties to the fullest.

As Tunisia hosts the 8th Tokyo-African (TICAD) Summit this August, he said Tunisian aims to explore new opportunities for partnership in all field of Agriculture, Pharmaceuticals and security as well as forging new economic synergies between Tunisia, Japan and Africa working together to promote those issues of common interest.