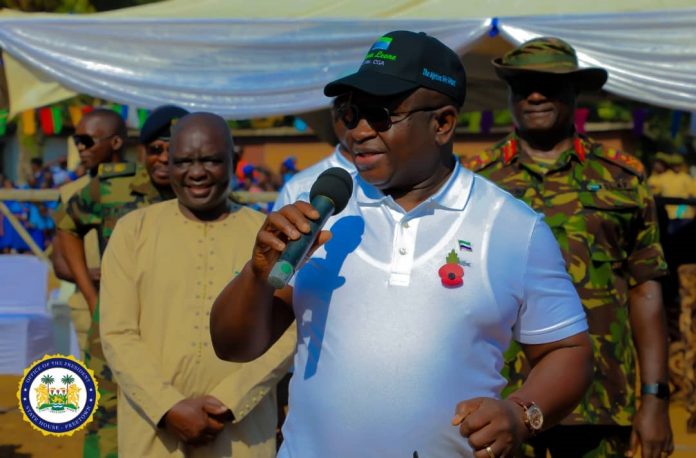 President Julius Maada Bio has told members of the Republic of Sierra Leone Armed Forces (RSLAF) at the 11th Infantry Battalion in Kambia that as an old soldier, he would never avoid the barracks.

He made this statement at the Pebue Military Barracks while eating breakfast together with the soldiers.

“The military is my only discipline. As military officers, you should not be involved in politics. And because I am now a politician, that is why I have not been visiting you frequently. But that does not mean that I don’t appreciate the work you are doing. I recognize the good job you have been doing,” he told the officers.

“We have made some efforts to improving the lives of military officers. At the Myohaung Officers Mess in Wilberforce, we have done 104 rooms for officers. We are constructing 500 bedrooms hospital with state-of-the-art machinery for medical facilities for soldiers, among other things,” he said.

President Bio vows to systematically address the problems that the military officers have been going through, while calling on them to be patient.

He said the Pebue Military Barracks was his professional home, disclosing that when he was first commissioned as a military officer, he was posted there.

After giving brief remarks, President Bio joined the queue for his breakfast. After collecting his own dish, he sat down with the officers in a roundtable to eat and discuss with them individually.