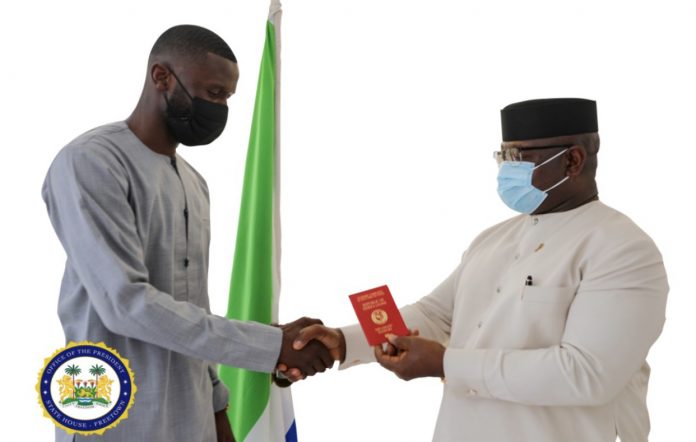 Antonio Rüdiger is a Sierra Leonean-German professional footballer who plays as a centre-back for Premier League club, Chelsea and the Germany national team.

Director of Protocols in the Ministry of Foreign Affairs and International Cooperation, Lamina Paul Vamboi, said it was a remarkable and historic occasion in the history of football in the country as one of Sierra Leone’s distinguished compatriots was awarded by President Bio as a Brand Global Ambassador.
He added that the award ceremony reaffirmed the commitment by the government of Sierra Leone to canvass and promote sports as well as sporting activities with the aim of ensuring the country’s participation in sports on the international stage.

“Today, Antonio Rüdiger is being recognised for his outstanding role and contribution to Sierra Leone in the area of promoting sports. Also, he is a benefactor to His Excellency the President’s top priority of promoting Free Quality Education in the country,” Mr. Vamboi noted.

Reading the citation for the awardee Antonio Rüdiger, Press Secretary and Presidential Spokesman, Yusuf Keketoma Sandi, said the humble personality of Rüdiger was the reason for his successes on the pitch and his highly decorated football career. He added that the footballer had also launched his foundation, focusing on sports education, sports infrastructure, sports inclusivity and literacy.

“Our recipient does not relent or hesitate to donate to causes dear to his heart and that benefit millions of children in Sierra Leone. His mission, it seems, is about changing lives and changing stories. On Sunday 19 January 2020, he met with His Excellency President Dr Julius Maada Bio, on the margins of the UK-Africa Investment Summit in London and pledged Le1 billion ($101,000) for Sierra Leone’s Free Quality Education initiative.

“No doubt, it still remains the largest contribution by a single individual to the Free Quality School Education programme,” he disclosed.

In a brief acceptance speech, Antonio Rüdiger expressed gratitude to President Julius Maada Bio for the recognition and award and extended appreciation to his family without whose support, he said, the award and recognition would have been impossible. He added that he felt honouredand proud to accept the award.

“Thank you very much. I feel honoured to serve this country and put this country in a better light,” he concluded.

While handing over the diplomatic passport to Antonio Rüdiger, His Excellency President Dr Julius Maada Bio congratulated him on his award and thanked him for accepting such a distinguished honour. He added that Rüdiger had shown that he was not only a Sierra Leonean by blood, but also by his action when he donated a billion leones to the endeavour of advancing education to every child in the country.

President Bio further noted that the country appreciated the efforts of Rüdiger in improving the lives of his fellow compatriots and assured that whenever footballer was on the pitch playing, the country had tuned in to watch him with love and passion.