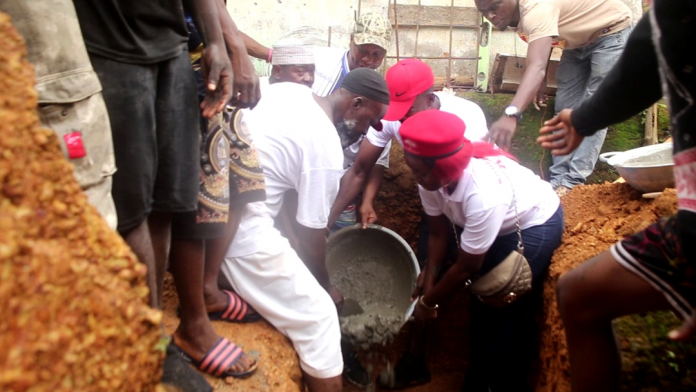 Safe mobility has been a big challenge for residents at hilltop communities within Freetown owning to poor road network and life threatening bridges.

And for residents at Deep Hole Community off scan drive the lack of a safe bridge has over the years prevented their movement and linkage with other communities. However, this problem is about to end owning to the intervention of Julius Bambay Kamara who says his intervention is to ensure the safety community people.

Commission the construction work, aspiring Member of Parliament for Constituency 131 seeking symbol from the All People’s Congress (APC) Party Julius Bambay Kamara says he is motivated to embark on such hug project because of the constraints he has seen residents within the community go through to connect. He noted the place has been and eye saw and a threat trap in the community. He furthered he was moved to construct the bridge after he was informed about children who have lost their lives which he noted does not what a repeat.

Julius furthered intimated that the eighty five million Leones project is single handily funded by himself and it is not geared towards supporting his political ambition but a serves to humanity. He continued that the bridge project at Deep Hole community is among the many project requested by him from communities within his zone. He therefore called for the support of community people to ensuring the success of the project.

Commending Julius Bambay Kamara for what he described as a blessing to the community Chief Simah Dumbuya of the Deep Hole community noted that for over twelve years residents in this community have been seeking support for the construction of this bridge that has led to the death of children and also pregnant women in the quest of fetching water. He appealed to his community support the project by providing manual support while noting he will ensure the success of the project which is a big help to them. He furthered that there have been lot of false promises before and finally their prayer has been answered through the help of Julius Bambay Kamara.