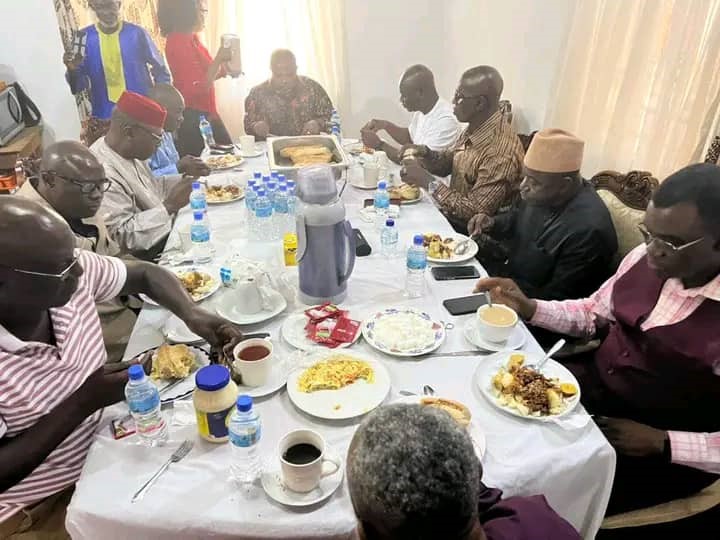 Over the weekend, former President of Sierra Leone, Ernest Bai Koroma summoned all intending aspirants to lead the Party to the June 2023 Presidential elections, to his residence in Makeni. Nine APC flagbearer aspirants have breakfast together with former President Koroma in Makeni.

The meeting according to sources, was to unite the intending aspirants and gear up the party for the forthcoming elections.

So far, Dr. Kaifala Marah, Bassie Kamara, Mohamed Kamara and Kemoh Sesay are among the few intending flagbearer aspirants that have officially declared their intentions to run for the high seat.

In similar development, the APC 2018 Presidential Candidate, Dr. Samura Kamara has met with all of the province’s council members, mayors, and chairs to a gathering in Makeni.

“Indeed, the excursion was successful. Dr. Samura Kamara said, adding; “We are one step closer to winning. I will keep my commitment; therefore, you can rely on me to steer the mantle of leadership of our nation come June 24th, 2023”.

The meeting’s goals were to put to rest the false information about caps within the APC and to put an end to rumour that were going around on social media that Dr. Samura Kamara would be prohibited from voting in the presidential election on June 24 because of an ongoing legal matter.

Addressing the stakeholders, Dr. Samura Kamara emphasised that he is a member of the APC Team and has no plans to cater his political aspirations to any one group, be it Team A, B, or C.

He said everyone is welcome to work together since the APC is a large family and that they must put forth a lot of effort to be united and be effective.

In Port Loko, Tokolili, Makeni, Karene and Bonthe, local council members received promises from Dr. Samura Kamara that if elected president, he would not interfere with their affairs.