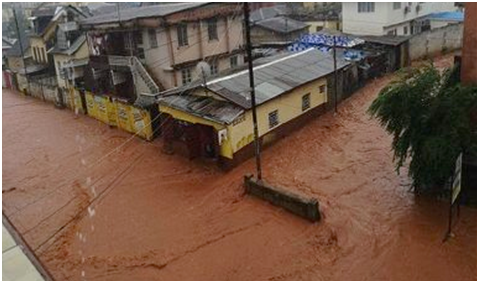 The Agencies recalled that there has been a continuous heavy downpour of rain in Freetown and its environs since the night of Monday 15th August 2022 running into Tuesday, August 16th.

Consequently, the NDMA and the SLMET said they have received various reports of flood incidents in some communities and flash floods on major streets in Freetown.

Fortunately, there has been no reported death(s) and/or destruction of any major property during this period.

Also, the NDMA revealed that it has dispatched its personnel to conduct assessments in flood areas for possible intervention.

Furthermore, the Agency has also received a weather forecast from the Sierra Leone Metrological Agency and has confirmed that the trend of rainfall will continue for the ongoing period. “We are therefore asking citizens to take precautionary measures to save lives, properties, businesses and critical assets” they warned, while advising that people living in low-lying areas should move to high grounds; people living on critical and dangerous steep slopes should move from those areas; take cover in a strong building or under a shelter; those living on hilltops should stop throwing waste into drainages; parents should ensure their children avoid walking in the rain and avoid drainages; radio stations should help support incidents reporting that need an emergency response; willingly evacuate if you are directed to do so; turn off electrical appliances during heavy thunderstorms; listen to weather updates regularly from NDMA & SL Met.