As Frist AFRICARIBBEAN Festival Set to be hosted in Sierra Leone….

As Frist AFRICARIBBEAN Festival Set to be hosted in Sierra Leone…. 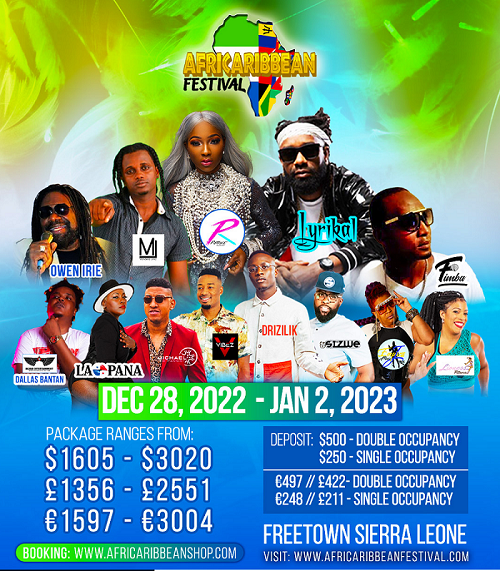 Entertainment in Sierra Leone has evolved, as two of Sierra Leone’s finest artitses Drizilik and Dallas Bantan will be performing live at the Africarribean Festival to be hosted for the very first time in Freetown, Sierra Leone.

The Miami Carnival is seemingly dedicated to bring a safe family festival in south Florida and outlying areas to foster community pride, civic involvement and providing critical opportunities to the Caribbean people in South Florida with an aim of sharing the Caribbean culture.

It was established also to promote cultural exchange and building an economic cooperation in the multi-ethnic and multi-cultural environment of South Florida.

With such a history, the Africaribbean festival is designed to take such cultural values to Africa with a first stop in Freetown, Sierra Leone.

This will be an ultimate festival events showcasing Sierra Leonean music (Gumbe), African Music (Afro-beat) and Caribbean music (Soca Calypso) within a six days long festival of arts, and a lot of entertainment bounties lined up for your December festivities.

It is indeed a bold step in the creative industry, as it is believed to bring together and the engagement of Africans, Caribbeans, African Americans, Afro Latinos and Afro-Asians through Music, arts, culture and ancestry.

Africaribbean Festival is expected to be a platform to celebrate, showcase heritage, promote local and international talents through such an experience that will culminate in the presentation and unveiling of a set of commemorative artworks from the district of Maryland and virginia’s (DMV) arts community to the residents of the city of Freetown bringing together the African and carribbean Culture in one unique location in Freetown, Sierra Leone.

Visitors are expected from around the world to participate in this six days long festival.

Drizilik and Dalas Bantan from Sierra Leone are amongst the list of international artistes to perform in this festival to be held on the 28th of December 2022 to the 2nd of January 2023.

Sierra Leoneans should expect a unique and culturally diverse experience that have never happened in any other African Country.