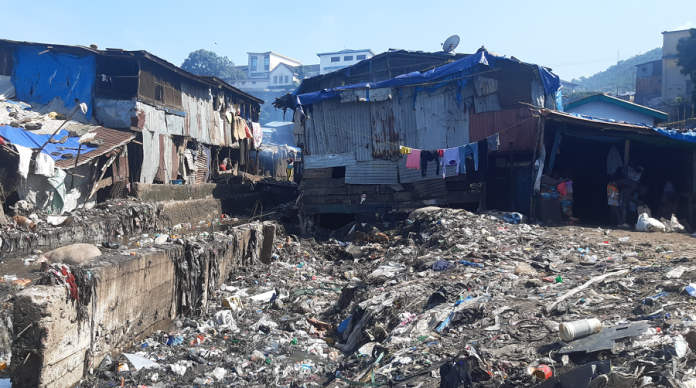 Some residents of Moa Wharf Community in the East End of Freetown have said poor drainage system has been a major problem in their community. According to these residents, the community has a poor drainage system ranging from accumulation of waste and poor housing structures and illegal activities from surrounding areas that used the main gutter as a dumpsite, which passes through Moa Wharf to the Atlantic Ocean.

Headman Moa Wharf Community, Manika Bangura disclosed that the gutter that runs through the community among other thing is key among the reason why they have always been affected by flooding in the community most especially during the rains.

“Whenever there is flooding many of our houses will be destroyed and economic activities of my people will be affected” he said.

Mr. Bangura alleged that the gutter is used as a dumpsite by residents in neighboring communities that in turn block water passage. “We have informed the Freetown City Council responsible for waste management in Freetown, but we are yet received response from them” he added.

Jennifer, a resident at Moa Wharf informed AYV that the poor drainage system in Freetown has greatly affected them as a community especially water that passes through the drainage to empty in the Atlantic Ocean during the rains.

“Year in and Year out we have been experiencing flooding that have destroyed our over the properties and causes some of us to be homeless” she said.

She further called on government for a construction of a new and better drainage system that allows water to pass through without affecting the community.

Gibril Sesay a resident noted that inefficient drainage systems and poor waste management at in their community has had a major public health issue and intensify disasters in the community.

Responding to allegations and concerns raised by residents, the Deputy Environmental Officer Freetown City Council, Sorie Kamara says, the council would take necessary measures that rangers from provision of manpower’s and tools to the clean the gutters, and enforcement of bye-laws to arrest and persecute or fine people unlawfully using waterways as dumpsites as a step to solve the problem face by the residents.

Mr. Kamara added that Moa Wharf is among communities going through the ordeals poor drainage system in Freetown.

“Flooding we all know causes destruction of lives and properties not only in their community but the entire Freetown. People deliberately deposit garbage in waterways and on the street which something that shows how uncivilized and unpatriotic they are” he said.