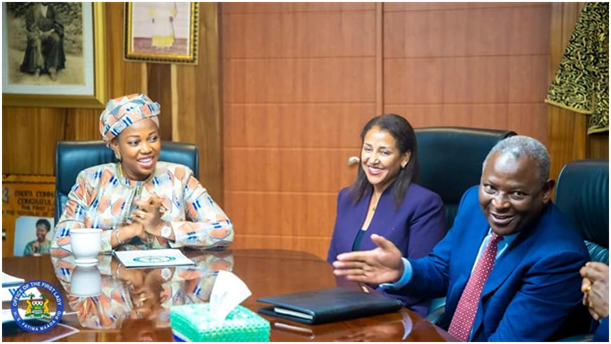 The First Lady of the Republic of Sierra Leone, Dr. Fatima Maada Bio has briefed a high-powered delegation from the Susan Thompson Buffet Foundation and Equity Bank in Kenya in respect to her contribution in the country’s health sector in line with the agenda of His Excellency the President.

The Susan Thompson Buffet Foundation was formed by Warren Buffett, the American multi-billionaire philanthropist and it is named after his late Wife. The Foundation works globally on women’s health issues especially those championed by credible global personalities like the First Lady of the Republic of Sierra Leone.

Prominent among the numerous interventions highlighted by the First Lady as her contributions, is the 34 Military Hospital Project.

“The 34 Military Hospital continues to play a leading role in protecting lives of Sierra Leoneans especially during major disease outbreaks,” she pointed out, while emphasizing the need for upgrade to meet the high demand.

The First Lady stated that the reconstruction project will among other facilities, house a one-stop Center of Excellence to care for rape and victims of various sexual offences.

According to her, the Center of Excellence would be entirely digitized with technological equipment, professional nurses and social workers trained and qualified to care for the girls.

Dr. Fatima Bio told her guests that she has never received any funding from the government or non-governmental organizations in this project.

She used the forum as an opportunity to tell the visiting team that President Bio prioritizes women’s empowerment as evident in the appointment of several women into key leadership positions.

“The President believes women should have equal opportunities to serve the nation,” she noted.

The Director of Global Programs at the Susan Thompson Buffet Foundation, Dr. Senait Fisseha, expressed satisfaction over the work being done by the First Lady in providing sustainable healthcare facilities to the citizens of Sierra Leone.

She disclosed that her institution has been collaborating and partnering with Sierra Leone’s Health Ministry to improve the health sector in the country.

She commended President Julius Maada Bio for creating an enabling environment for Women to take up senior positions in his administration.