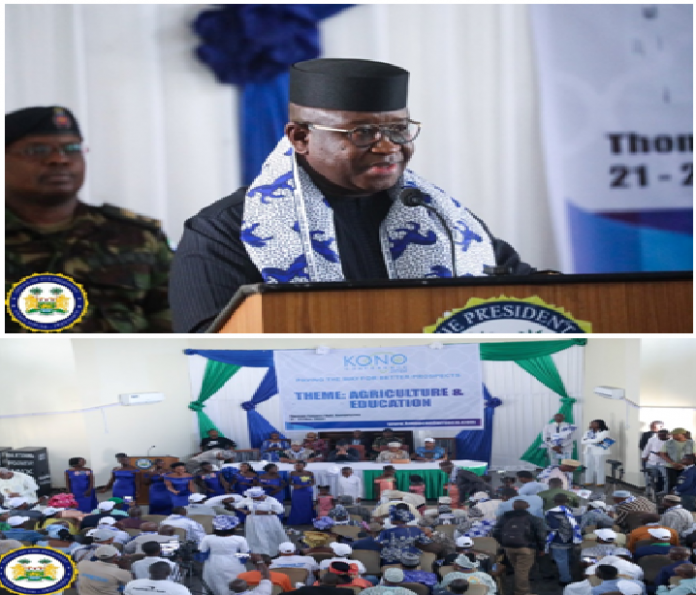 His Excellency President Dr Julius Maada Bio was in Koidu city to grace the 2022 Kono Conference where he encouraged people in the diamond-rich district to take the education of their children and agriculture very seriously.

He used the occasion to present his report card of over four years in office to the people, adding that he had done extremely well for them and the people of Sierra Leone within those four years as compared to the 11 years of other governments.

“Kono District now has about 176 pre-primary schools, 533 primary schools, 135 JSS, 42 SSS, totaling 877 schools. In all those schools, I have taken the burden of paying school tuition off all parents, regardless of political or ethnic stripes.

“We are also providing examination materials in core subjects for NPSE and BECE pupils in underperforming schools. In six chiefdoms of Kono district, we are providing school feeding to pre and primary schools and already providing free teaching and learning materials and sporting equipment to schools at all levels,” he said.

He thanked the organisers of the conference for their initiative and for extending an invitation to him, adding that the passion he had for Kono district was not political but was about correcting the social injustices that the district had faced over the years.

He furthered that the district could only be successful in its development efforts if its people came together as evident in the spirit and intent of the 2022 conference, emphasising that the greatest assets they had were not diamonds but the people of Kono.

He described the Kono people as intelligent and brilliant, noting that that was why his government felt it was really very important to establish a university for the district, which once completed would be one of the best in the country.

“I am very happy that my government is actualising the dream of the Kono people to get a university of their own, built in Kono to serve Kono people. The Kono University of Science and Technology is in progress.

“As flagbearer during the 2018 elections campaign, I made a pledge to diversify the future of Kono. So, how do we open up a future of possibilities and invest in Kono people and empower Kono people? With this in mind, the district has experienced substantial government investment in the agricultural sector.

“To act on the policy shift initiative, 14 tractors, 12 power-tillers and 3 combined harvesters were allocated to the district to increase on the area under cultivation for rice and other food crops. To increase rice production, farmers have been directly supported with machine services to cultivate 1400 ha of rice in the 2021 and 2022 production seasons.

“These farmers were also supported with inputs such as good quality seed, fertilizer and agrochemicals. For the first time in history Kono has become a major rice seed hub for the production of high-quality seed, thanks to the First Lady, who launched the initiative and project together with the seed specialist of Kono descent,” he concluded.

In his welcome statement earlier, Paramount Chief Tamba Emmanuel Torche Foyoh IV of Sao Chiefdom, who doubles as Chairman of the Council of Paramount Chiefs in Kono, thanked the President for gracing the conference and for advising them to embrace education as part of his flagship human capital development drive.

He added that the conference was to galvanise ideas and support around the development of the district using a non-partisan approach and drawing its attendees from all walks of life.

In her statement, First Lady Madam Fatima Bio, who hailed from the district, thanked the people of Kono for the warm reception accorded them and encouraged them to continue to be peaceful like they had always been over the last four years.

She also admonished them to encourage the youths to desist from taking harmful drugs but work hard to become peaceful citizens, especially ahead of the 2023 elections.