August 10 Rioters Get 18 Months in Prison

August 10 Rioters Get 18 Months in Prison 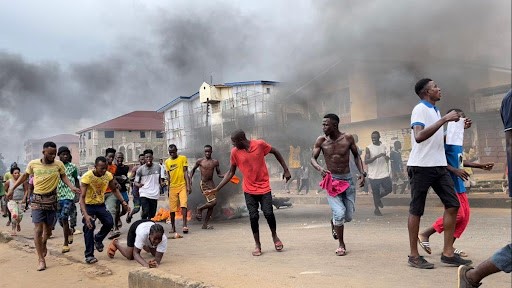 It was alleged that on 10th August, 2022 at the Central District of Freetown, the accused persons were found rioting and behaving in a disorderly manner.

In the same matter in another court, Magistrate Isata Sellu Tucker yesterday discharged 2 accused persons, Santigie Kamara and Santigie Dumbuya for Unlawful Procession Disorderly Behavior and Riotous Conduct contrary to Law and sentenced 7 others to 16 months with a fine of five million leones.

Outside atmosphere of the court room was tense with family members and friends shading tears after the message of the judgments met them.

Before the judgment, observers, family members and friends were asked out by the police officers.

According to the charge sheet on all counts, the accused persons on Wednesday August 10th off Sheriff Drive, Lumley, Freetown were found partaking in an Unlawful Procession, also Behaving in a Riotous manner.

The 6th accused Santigie Kamara, based on health status as confirmed by the Medical Superintendent Sierra Leone Correctional Centre, Dr. Tamba Lebbie and supported by Dr. E. A Nahim, was acquitted and discharged.

The 2nd accused Santigie Dumbuya was discharged because the Prosecution did not prove their case beyond reasonable doubts.