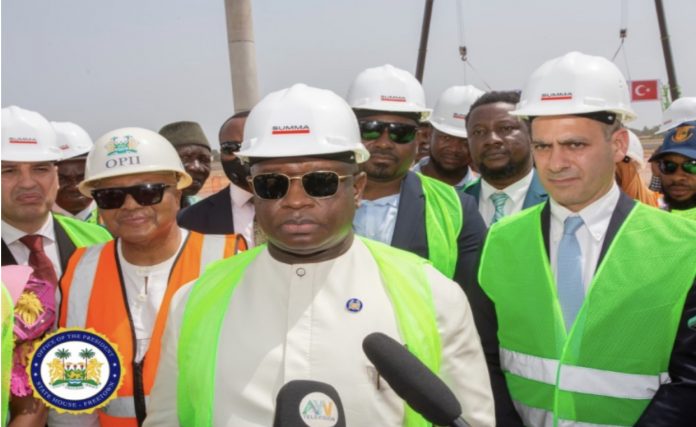 President Dr Julius Maada Bio has visited the Freetown International Airport, since work started on 12 November 2020, to inspect the $270 million work on the new airport terminal project that will accommodate one million passengers per year once complete later this year.

Chairman of the Office of the Presidential Infrastructure and Initiatives, Dr John Tambi, said the ongoing work was a testament to what God can do for Sierra Leone in a very difficult situation.

He noted that even though Coronavirus was ravaging economies around the globe, it was uplifting that the President was on an inspection tour to have firsthand information of the work that SUMMA Group was doing to expand the capacity of the airport to an estimated 13,200 square miles from the current 7,200 square miles.

“This is the largest Turkish investment in Africa so far and when completed it will give a facelift to our country and open it to investment,” he concluded.

Country Director of the SUMMA Group in Sierra Leone, Ibrahim Sheriff, said they were a multinational Turkish company operating in about 8 African countries, adding that they were building a new terminal that would create the transformation of a new airport in Lungi.

He maintained that the company had already employed hundreds of Sierra Leoneans who were primarily indigenes of that locality, adding that SUMMA Group would continue to impact lives and add to the socio-economic development of the country.

“At the end of this year, we will all be gathered here again to celebrate the completion of this all-important project,” Sheriff concluded.

In a brief statement, His Excellency President Dr Julius Maada Bio thanked the people of Lungi for hosting and supporting the project he too was now very anxious to see and why he had taken time off his busy schedules visit and follow-up on progress.

The President emphasised that the construction work was the largest such investment in Africa by the Turkish developer, a demonstration of confidence in his government. He added that the airport was the gateway of the country, so a modern facility was necessary to beautify the country and attract direct foreign investments.

“I am pleased with the progress made so far. I am very excited to be here and to share this moment with you. Thank you very much,” he concluded.