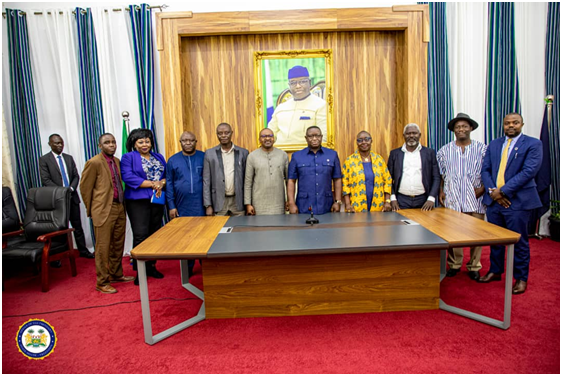 President Dr Julius Maada Bio has met the leaderships of Civil Society Organisations (CSOs), the Sierra Leone Association of Journalists (SLAJ), and the Sierra Leone Bar Association (SLBA), what he calls a simple irregular disruption of the country’s democracy by a few people on 10 August 2022.

The President thanked the CSOs and media ecosystems for constructive criticisms of his government and their assessments of governance issues, the majority of which are both negative and positive.

He said despite the various efforts to keep the country and government in check, as part of the democratic process, his government had been constantly reminded to walk on the path of a positive trajectory. He also reminded the gathering of how, collectively as a nation, they had built a positive image of a country that was resilient and one that had championed its own course to development, irrespective of the odds.

“In just a few hours, last week, all that was thrown out of the window by a group of Sierra Leoneans with no leadership, likely because the perpetrators are ashamed of taking responsibility for the act,” he said, adding that despite the ongoing denial, with the assistance of technology, his government was able to identify those behind the insurrection of August 10 based on their footprint on the cyberspace.

The President said it was against that backdrop that his government was engaging with various stakeholders and moral guarantors of the nation’s peace, democracy, development and national cohesion, to map out a way forward.

President of SLAJ, Ahmed Sahid Nasralla, condemned the violence and sent condolences to the President and the bereaved families, stating clearly that as a nation all sectors, including citizens within and outside the country, must take responsibility for what happened on that day.

“The root cause of all the problems in the country is too much politics, which has divided us as a nation. We need to pipe down because it will further divide all sectors. It distorts and disrupts the government’s focus on the New Direction it promised the nation.

“Politics has promoted hate and hypocrisy, undermined patriotism and nationalism, peace and national cohesion, and eroded core values of labour, excellence, dedication, integrity and trust,” said the president of the journalists’ association.

President of the Sierra Leone Bar Association, Ms. Eddinia Michaela Swallow, said the day was sad and terrible after the end of the civil war 20 years ago. She said the successful democratic transfer of power was a positive indicator that demonstrated how civilised we were as a nation. She, however, noted that even though the riot was faceless, it was fuelled by individuals and as lawyers, they looked forward to the government bringing those people to book.