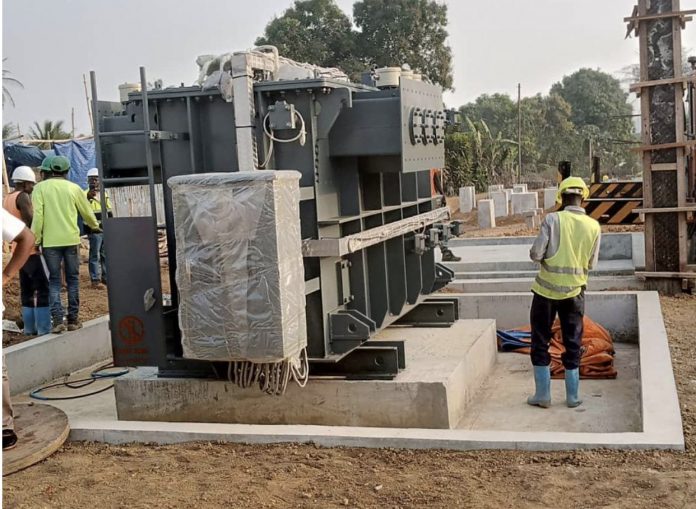 The General Project Coordinator at the Ministry of Energy, Ing. Dr. Edmund Wuseni, has on behalf of the Minister of Energy delivered six power transformers at the Bandajuma and Bandama Substations in enhancement of the Bo-Kenema Network Rehabilitation and Expansion Project.

Each substation at Bandajuma in Bo and Bandama in Kenema received three transformers, including a giant 20/26 MVA and two sets of 10/14 MVA transformers.

Making a brief statement at the handing over ceremony, Dr. Wuseni said the two giant power transformers at 66KV would transform the power from 66KV to 33 and to 11 respectively, with each having a capacity of 20MVA.

He said the two smaller transformers for each substation would complement the evacuation of power from the substations to the cities of Bo and Kenema and other towns.

EDSA’s Southeast Regional Manager, Ing. George Seyia said the package was part of the Bo-Kenema Network Rehabilitation and Expansion Project, adding that even when the two cities were now connected to the regional CLSG interconnections, they were still using obsolete transmission and distribution infrastructures.

He said EDSA wanted to broaden its market base since the CLSG electricity had come with additional financial burdens on the utility, noting that considerable progress had been made in their quest to rehabilitate and expand the network.

Ing. Seyia concluded by saying that the transformers would positively impact transmission and distribution efforts in the two cities.

General Manager of Alpha T&D, Ing. Mohan Singh said his company, which was implementing the civil works aspect of the project, was assiduously working to complete the project in time. He said the system was being upgraded to ensure a reliable supply of quality electricity.