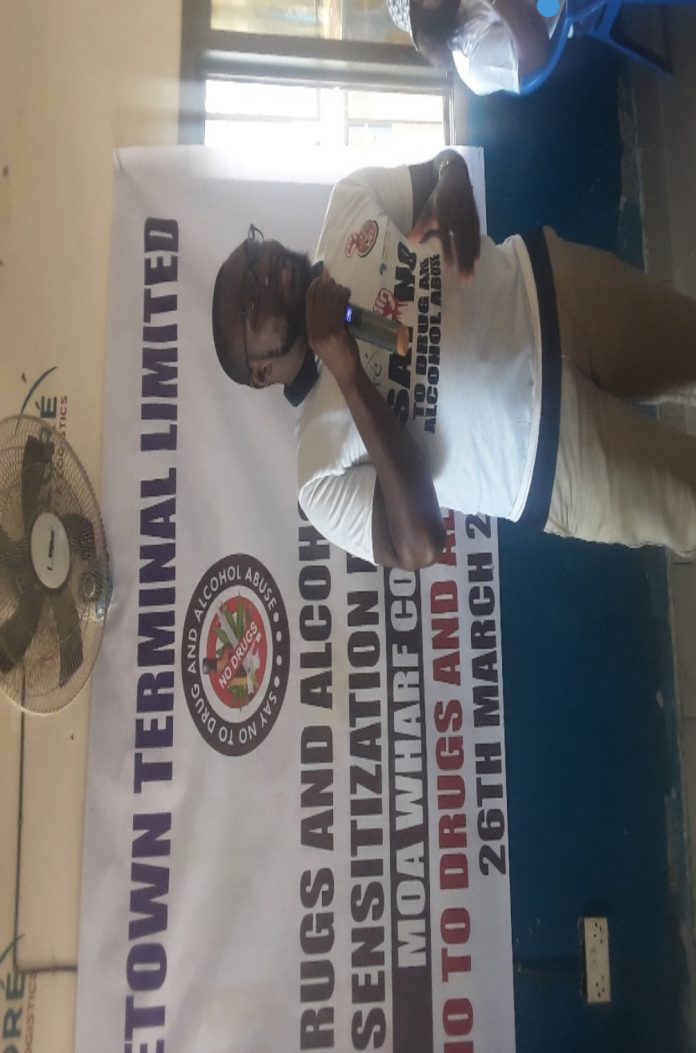 Freetown Terminal Limited, a subsidiary of the Bollore Transport and Logistics, on Saturday, March 26, 2022 held a campaign against drug and alcohol abuse at the Moa Wharf and Seaside communities in Freetown.

The campaign brought together victims of drugs abuse, campaigners, and hundreds of community stakeholders. The activity was held as part of the company’s corporate responsibility.

Substance abuse has long been a problem for the impoverished Sierra Leone. Throughout the 1990s, a civil war gained notoriety for the role played by drug-fueled teenagers, who committed atrocities.

Substance abuse refers to the harmful or hazardous use of psychoactive substances, including alcohol and illicit drugs. One of the key impacts of illicit drug use on society is the negative health consequences experienced by its members. Drug use also puts a heavy financial burden on individuals, families, and society.

He said that that it is the responsibility of the company to education the community about the harmful effects of drug/alcohol abuse.

Isatu Jalloh, Chairlady of the Moa Wharf Community, said that drug/alcohol abuse is a serious problem in their communities. She said that youths and children who are abusing substance are becoming lawless and disrespectful and are involve in crimes.

She said that drug abuse is destroying abilities of youths.

She called on the relevant authorities to take the necessary actions to curtail the spread of harmful substances to save the future of communities.

“Thanks to Bollore for the supporting the sensitization. This is the type of company that deserves community support,” he said.

He said that his constituency is at the centre of drug and alcohol abuse because it is located at the heart of city, Freetown.

He urged members of his constituency not to allow poverty and stress to push them to taking drug and alcohol.

He said that drug and alcohol affect one’s income, health and wellbeing, distort the body function, and kills one’s dream.

“Addiction is the most dangerous side of the drug and alcohol abuse,” he said.

Mokuwah maintained that advocacy is the most critical component in the fight against drug/alcohols abuse.

The Public Relations Officer of the National Drug Enforcement Agency, Ibrahim Kargbo said that drug abuse greatly affects health and production of the victims. He said that his Agency provides psychosocial support to victims of drug and alcohol abuse.  He admonished youths to desist from substance abuse. Testimonies of victims of substance abuse climaxed the campaign.