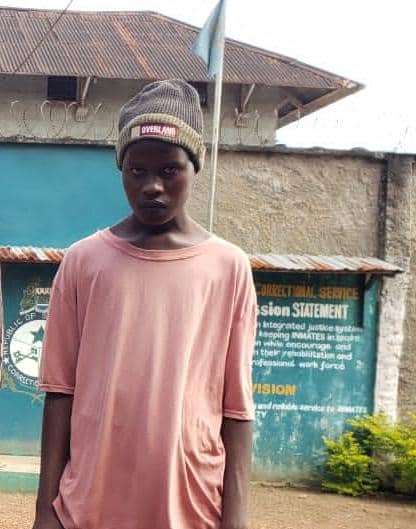 17-year-old Umaru Bah, popularly known as Sparta from Manowa Peje Bongay, Kailahun district has told the Court in Kenema that he was detained for fifteen months at the Kenema Male Correctional Centre for stealing a two leones loaf of bread.

According to Bah, he was never convicted but was still on trial. He was speaking during the Judicial Week which is supported by the United Nations Development Program (UNDP).

“The Magistrate did not give me audience but today the Judge gave me audience to explain my own side,” he said in tears, whilst thanking the Hon. Chief Justice Desmond Babatunde Edwards for fighting what he called “injustice” to review their cases. He was released during the ongoing Judicial Week.

Desmond Luke who was sentenced for one year or pay a fine of one million leones old notes was acquitted and discharged. Desmond, a tailor was given One Hundred Thousand Leones old notes by one Ibrahim Kamara who later instituted legal action against him for failing to sew his clothes or refund his money.

He said during his first appearance before the Magistrate’s Court he admitted to the offence and was sentenced to one year or pay a fine.

In his address, Supreme Court Judge, Hon. Justice Alusine Sesay said the administration of justice is fundamental to the operations of the Judiciary, stressing that the essence of the Judicial Week is to enhance access to justice.

Umar Bah, Desmond Luke, Mustapha Saidu, Lucy Bockarie and Kadiatu Bockarie were among those given transport fares to their respective places to reunite with their families and loved ones.

They prayed for the Hon. Chief Justice Desmond Babatunde Edwards for his support.

Lucy Bockarie described Chief Justice Edwards as a true servant of God whilst Desmond Luke called him a “Saviour of Humanity.”

The access to justice through Judicial Week will give the opportunity to some accused persons or convicts to be heard while in detention and have their cases reviewed by two Judges, one in Magburaka and one in Kenema.

Meanwhile, 24 of the accused persons who were granted bail will have the opportunity for their bail conditions to be reviewed by Supreme Court Judge, Hon. Justice Alusine Sesay.