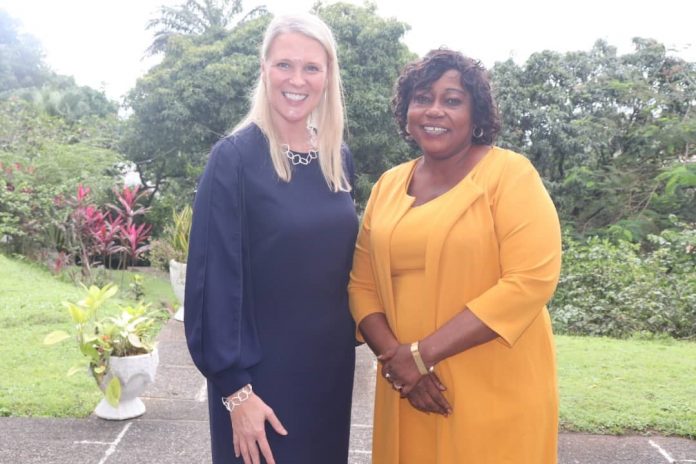 The lunch-filled engagement was used to deliberate on issues pertaining the two countries on diplomacy, bilateral relations and development initiatives. In attendance were the Private Sector Development Adviser of the British High Commission, Christina Toepell and other staff of the commission.

Lisa Chesney applauded Sierra Leone’s President, Dr. Julius Maada Bio for championing issues of women on the world stage, a step she said many leaders across the world are afraid to take.

She was impressed by Sierra Leone for going beyond what was happening in the sub-region and take decisions as a sovereign state. She commended Minister Pratt for the many developmental strides in the Tourism Ministry under her leadership.

On her part, Dr. Memunatu Pratt explained the many virtues Sierra Leone is enjoying ranging from religious tolerance to women involvement in the politics and the development of the nation.

She appreciated the work of the British Commission in Sierra Leone and called for support to the Tourism Ministry. She expounded on the timely reforms and the many programmes and activities implemented by the Ministry including the just concluded Tourism Parliamentary Governance Conference that took the whole of Parliament to Bo.

She mentioned the Ministry’s eco-tourism and domestic tourism drives which she said have yielded dividend. She disclosed that she has been appointed by UNWTO to chair the global forum for women in tourism which she said was aimed at sharing the Sierra Leonean experience in women empowerment on the global stage.