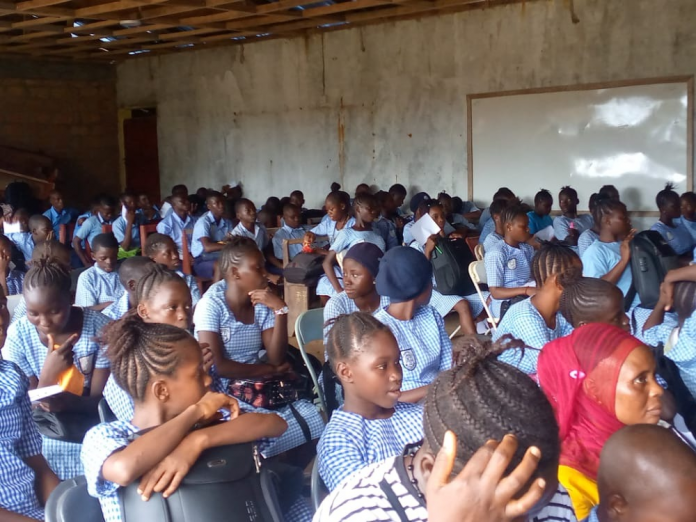 Caritas Sierra Leone has empowered over 500 girls on International Day of the girl child through awareness raising on gender-based violence, early marriage, sexual penetration among others with the theme: “Our time is now-our rights our future’’.

Speaking at the program, the Program Manager of Caritas –Justice and Peace Commission, Madam Eliza EOG Sillah said the program is to celebrate girls and the International Day of the Girl Child focusing attention on the need to address the challenges girls face and promote their empowerment and the fulfillment of their rights.

She furthered that the program was organized in order to engage stakeholders, parents, boys and girls on the importance of keeping the girls safe in Newton Community.

She called on parents to protect girls and keep girls in school ‘’our girls should not be forced into early marriages,’’ she said.

She encouraged the girls to befriend their books and study hard in order to pass their exams adding that education is the key to success.

In an interview with a civil society activist, Idris Mansaray, he expressed thanks and appreciation to Caritas for engaging stakeholders and girls on the importance of protecting the girls in Newton Community.

He explained that 10 years ago, the United Nations General Assembly adopted Resolution 66/170 to declare October 11as the International Day of the Girl Child to recognize girls’ rights and unique challenges girls around the world face.

He added that the purpose of the program is to empower the girls through awareness raising and to amplify their voices to talk about their challenges they face in society.

“Our girls are golden treasure and they must be protected at all times,’’ he said.

The Line Manager Family Support Unit Newton, Madam Amine M. Kpange Admin said that some parents cannot take proper care of their children and as a result sometime girls go on the streets to find for themselves.

She advised parents to protect their girls from sexual predators in society adding that sexual penetration has become the order of the day and that many young girls have suffered in the hands of wicked men, noting that police have charge many sexual penetration matters to court.

She admonished the boys not to engage in any sexual activities as the law will take its course.

She called on community stakeholders to protect and report any early marriage or sexual penetration matter to the police.

The Community Health Officer of Monsignor Daniel Sallion Health Clinic Newton, Madam Manjia Taylor advised girls on sexually transmitted diseases adding that one can prevent early pregnancy but cannot prevent STI or HIV/Aids “Sex is not for teenagers but for adults,” she cautioned.

She called on authorities to encourage their girl child to take treatment for cancer.

She explained that cervical cancer is the cancer of the uterus which extends slightly into the top of the Virginia and that it is deadly and difficult to treat.

She also advised girls to report any health issue to the hospital especially sexually transmitted diseases.

A student of St Francis Senior Secondary School Mary Bangura said that male teachers should treat girls like their children in order to keep them in school.

She called on her male counterparts to protect the girl child adding that boys should help girls but not to impregnate them.

She also cautioned the parents not to force their children into force labour but to keep them in school.

She warned her colleagues not to seduce their male counterparts noting that girls should dress responsibly.

She concluded that girls should to be protected, but it is also their responsibility to report any matter of early marriage or sexual penetration to the police.