Carter Centre in USA Pays Working Visit to the ACC

Carter Centre in USA Pays Working Visit to the ACC 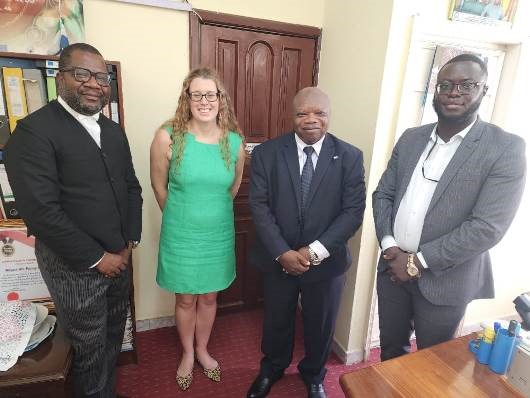 A team from the Carter Center, a non-governmental, not-for-profit organization founded in 1982 by former Unites States President, Jimmy Carter and his wife Rosalynn Carter over the weekend paid a working visit to the leadership of the Anti-Corruption Commission (ACC) in Sierra Leone.

The team which comprised Hilary Forden and Adrian Macaulay who were well received by the Deputy Commissioner of the Commission, Augustine Foday Ngobie, at the Commission’s Headquarter office, 3 Gloucester Street, in Freetown.

The Carter Centre which seeks to advance human rights and alleviate human suffering around the world has been working on several human-interest projects across the world including Liberia. It has worked in Liberia since 2006 with both national and sub-national stakeholders on “Strengthening the Rule of Law” aimed at advancing good governance and building trust to transform lives through enhanced accountability, transparency, and inclusive access to information and justice, conducted studies on “Women and the Right of Access to Information”in Liberia in 2014, Guatemala in 2015, Bangladesh in 2016, etc.

Advancing the purpose of the visit, Hilary Forden stated that they were in Sierra Leone to engage with good governance institutions on a study tour and the ACC happens to be one such.

She furthered that the exploits of the ACC and Sierra Leone’s Anti-Corruption campaign in recent times, the efforts invested and gains recorded are outstanding. She also stated that the consultations with governance and rule of law institutions will give the Carter Centre crucial information needed to guide a decision on its possible areas of intervention in Sierra Leone.

The Deputy Commissioner in his presentation stated that the ACC was established by an Act of Parliament in 2000, which was repealed and replaced in 2008 and amended in 2019, to lead the national campaign against corruption.

He underscored that the Commission employs a four-pronged approach viz; public education, prevention, investigations and prosecution, and the implementation of the National Anti-Corruption Strategy.

He stated that the ACC Sierra Leone is among the few anti-graft outfits in the world with guaranteed prosecutorial independence and very robust anti-graft legislation.

He highlighted the landmark gains recorded in the fight against corruption ranging from increased percentage in convictions, heightened corruption prevention work, unprecedented recovery of stolen public funds and property, massive and extensive public sensitization engagements, and progressive policy reforms to name but a few.

Speaking on the responsiveness of the Commission to accountability and transparency in its work, the Deputy Commissioner stated that, ACC has a very robust media and public relations mechanism that has ensured everything done at the Commission are transmitted to the public using all forms of media-traditional and new. The Commission operates several social media handles like an official website, Facebook, Twitter, TikTok, WhatsApp, etc.

These have increased the level of accessibility to the Commission by the public, ACC’s Deputy Commissioner added. Mr. Ngobie also informed the team that ACC has a functional Public Information Desk where members of the public can make enquires, make requests and seek clarifications on the work of the ACC.

The Carter Centre team asked several questions on the work of the Commission, the policy reforms, gender issues, partnership and collaboration in the fight against corruption, human and child rights issues, etc., which were adequately responded to by the Deputy Commissioner, supported with data and facts.

In his contribution whilst responding to some of the questions from the visiting team, ACC’s Director of Operations, Emmanuel Koivaya Amara Esq., pointed out that the ACC with support from the Pro-Bono Team from the UK/Sierra Leone have now developed a policy direction for uniformity and certainty on the Non-Conviction Asset Recovery programme, Sentencing Guide for Judges at the Special Anti-Corruption Division of the High Court, trial in absentia for absconded culprits of corruption, a reformed bi-annual asset declaration management regime-which has allowed for the verification of declared assets, an unbiased gender-sensitive employment policy,-which has made women to account for about 40% of the Commission’s workforce, to name but a few.

Concluding the meeting, the Carter Team registered that they were pleased with the level of detailed and frank discussions. The meeting was climaxed by the presentation of hard copies of the 2021 ACC Annual Report, the Anti-Corruption Act 2008 (as Amended), and other useful literature on the work of the ACC by the Deputy Commissioner.