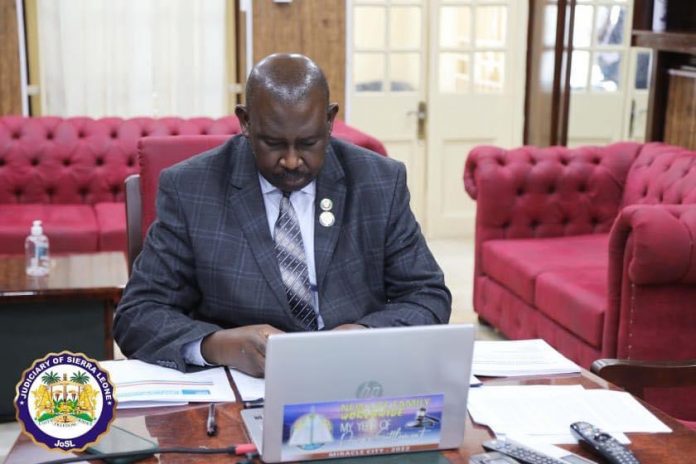 The Chief Justice was speaking as a Special Guest at the 6th International Chamber of Commerce Africa Conference on Arbitration on the theme, “African Arbitration: Consolidation and Transformation.”

The English Law, he continued, had long departed from this Law with the promulgation of English Arbitration Act, 1996, but we in Sierra Leone continued with it.

He said: “They gave us a legacy we are unwilling to abandon. In its Long title it reads ‘this ordinance may be cited as the Arbitration Ordinance and shall apply to the colony and the protectorate.’ So, its application is only and solely in Sierra Leone, never mind what lawyers would wish.”

“This is in contrast with other Arbitration Laws Like the UNCITRAL MODEL LAW 1985 as amended in 2006; the English Arbitration Act 1996, the German ZPO, the SWISS Private International Law and many more statutes all of which has an international Application e.g. the UNCITRAL Model Law provides that this law applies to International Commercial Arbitration , subject to any agreement in force between this State and any other state or states and then goes on to define when an Arbitration is international,” the Chief Justice said.

Honourable Chief Justice Edwards went further to assert that disputes are an inevitable occurrence of life and international arbitration remains the most important and widely used dispute resolution mechanism of choice for cross border disputes.

“Guinea, Liberia, The Gambia and Sierra Leone all do have Arbitration Laws,” he said, while reiterating that, “in the case of Guinea, they have The Ohada Uniform Arbitration Act 1999 as amended; the Gambia – The Alternative Dispute Resolution Act Chapter 6 of 2005 as amended by Act No. 6 of 2006; Liberia, you have the Liberian Commercial Code of 2010 – Title 7 Chapter 7 of the Liberian Code of Laws Revised Commercial Code – Commercial Arbitration. These are relatively new and modern Arbitration Laws which may not represent the best as they may need improvements here and there but present good scenarios for making these Countries reasonably attractive for Arbitration.”

He reiterated that with Sierra Leone, Cap 25 of the Laws of Sierra Leone 1960 was the oldest in the sub-region, hence the need for reform into that Act.  The good news however is that the New Arbitration Bill was expected to be tabled in the House of Parliament as the New Arbitration Act of 2022.  This New Arbitration Bill, apart from the best practice provisions covering things like a stay of proceedings, limited court intervention, interim measures, severability, powers in relation to the constitution of the tribunal, competence – competence; determination of questions of law by Experts appointed by the Tribunal, determination of recoverable costs, an extension of time, coercive powers re-witnesses etc. and most importantly recognition, challenge, setting aside and enforcement of Awards covering things like: third Party funding with restrictions on champers, emergency Arbitrator proceedings, expedited hearings, establishes the Sierra Leone Arbitration Centre where the composition would include renowned Arbitrators around the Continent, court Intervention is limited, incorporates the New York Convention to which Sierra Leone is a member incorporating its reservations, the New Concept of “Arbitration Proceedings Rules” dealing with when, how and time limit for applications, enforcement of Peremptory Orders and investor-state Arbitration Enforcement.

All of which are bound to make Sierra Leone attractive as a place for Doing Business causing direct foreign investment.

He used the occasion to dilate on ways in which arbitral institutions can collaborate to build capacity within the continent as well as future opportunities and ways to enhance Africa’s economic development that will attract important foreign investments through the instrumentality of international arbitration.

On his part, Robert Volterra, Founding Partner of VolterraFietta in Canada said there is a need to encourage local lawyers to develop their expertise in Arbitration, adding that Arbitration has now been viewed as a fundamental tool for enabling business and investment in the continent and measures are now being put in place to update their arbitration laws, especially in the enforcement of foreign awards.

He also highlighted the key current developments in the various regions of Africa- East, West, North, South and Central Africa and finally outlined the gains made thus far in the region.

According to him, one issue that has drawn significant attention from the international community in recent years is the assessment of damages in the context of international disputes.

Prof. Mark Kantor – Arbitrator and Mediator; Georgetown University Law Center, United States of America like other speakers expatiated on how wide is the gap in assessing loss between claimants and respondents and what are the common methods adopted by tribunals in assessing damages.