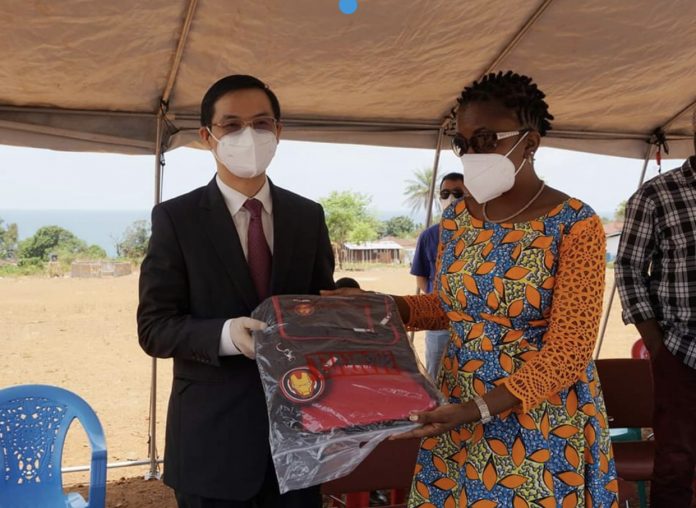 The handing over ceremony was graced by the Hon. Minister of the Western Region, Madam Nabeela Tunis, heads of the beneficiary communities and local residents.

In his statement, Ambassador Hu pointed out that rural development is an integral part of and an impressing task of nation building in every country. Getting rid of poverty is the shared expectation of mankind. Poverty alleviation requires not only material inputs but also spiritual strength.

Ambassador Hu commended the Sierra Leonean Government and people under the strong leadership of President Julius Maada Bio for making notable achievements in rural development. He said that in Sierra Leone, he saw the tenacity, perseverance and ambition in the people that are indispensable for winning a war against poverty and creating a better life.

Ambassador Hu expressed his confidence that the Sierra Leonean Government and people would achieve what they expect by making unremitting efforts. He reiterated that China would continue to expand and consolidate her cordial relationship and fruitful cooperation with Sierra Leone.

Minister Madam Nabeela Tunis extended sincere thanks to China for its long-term and strong support to Sierra Leone. She said that China’s development achievements have attracted worldwide attention. She affirmed that the Sierra Leonean Government also attaches great importance to poverty elimination and endeavors to promote the development of the rural areas. She hoped that Sierra Leone-China friendly cooperation in all the fields would be further strengthened.

Ambassador Hu also donated some living goods and school bags to the local communities through the Ministry of Western Region.

The local leaders and residents expressed their profound appreciation for the donation of the solar street lights and other items.