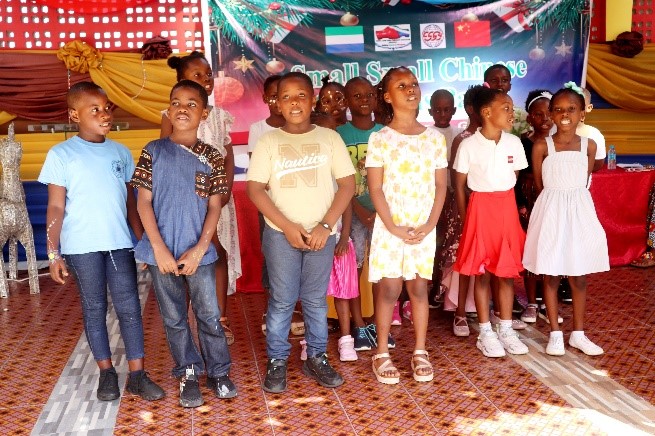 It was a funfair as kids from five (5) schools in Freetown showcased their talents in celebration of their first Small Small Chinese (SSC) Christmas Party.

The Christmas party organised by the Sierra Leone China Friendship (SiLCHA), Small Small Chinese (SSC) section, targeted over 150 kids from various schools, who are learning the Chinese Language, and was hosted by Excel Day Care and Academy with support from the Chinese Embassy in Freetown.

The celebration was also graced by the Chinese Embassy Head of Political Section, HU Aimin and GE Yao, Political Officer took time to interact with the kids and expressed optimism about the growth Chinese Language in the country.

HU Aimin expressed joy to be part of the kids’ celebration as he was happy to see smiling faces of the kids. He recalled that during his childhood days such opportunity where not there for them as kids during those days.

He took the opportunity to applaud SSC for what they have done by promoting Chinese Language to young people in Sierra Leone.

“This is a noble cause, because the Chinese language is one of the hardest languages in the world but it is the most interesting language. I encourage you to study hard, if you study hard, you will be able to know the language little by little through the effort of SSC,” he noted.

Mr. Hu furthered that the Chinese Embassy is supporting the great cause of Small Small Chinese, noting that through that more people will become interested in the language.

He disclosed that SSC is also collaborating with other partners like the Confucius Institute and the Ministry of Education among others to promote the communication between China and Sierra Leone.

“The embassy is very happy to see the growth of the program from strength to strength. Our hearts are with you; let us work together to make this program even bigger and stronger. I want to wish all of you a Merry Christmas and a Happy New year,” he said.

One of the school’s representatives, Janet Sefoi of Jarwlee Lewis School, said SSC is expanding.

“Chinese is doing it best because we want to break that barrier so that when the children go to China there will be no barrier for them,” she said.

She said they are grateful to share the joy of Christmas with the kids and also thanked SiLCHA and the Chinese Embassy for making it possible to interact with the kids.

“We will continue to press on to do the good work by expanding not only in Freetown but throughout Sierra Leone,” she stated.

SiLCHA Chairperson, Onike King said that part of the SiLCHA mission is to teach Chinese to everybody. She thanked the Founder of SiLCHA & SSC, Mariatu Kargbo for the passion of breaking the language barrier between the two countries.

Mrs. King went on to say that they made a decision that if they want to make thing work, they should start with the kids.

She explained that last year they started with one school and now they have 5 schools this academy year in partnership with the Confucius Institute and the Chinese Embassy.

She emphasised that Maria has done a lot as she is the brain behind the initiative.

“We are bringing the Chinese language to the doorstep of the people, and we are going school to school,” she said.

The kids played different games including dancing and singing competition as they interacted with one another.