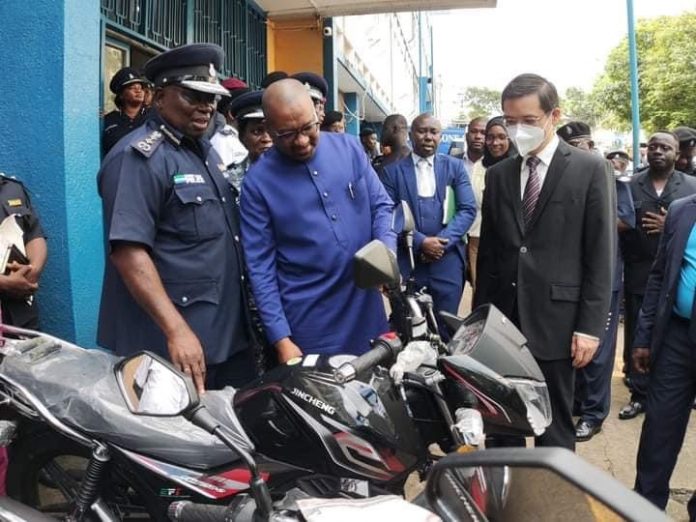 The bikes are meant to enhance the operational capabilities of the Sierra Leone Police in policing remote communities in the country.

Vice President Jalloh expressed thanks and appreciation to the Chinese Government for the gesture. He stated that one of the priorities of the New Direction Government was to support the operational capabilities of the police, adding that to establish security and fight crime, need available resources.

One key resources police need to increase operational capability is mobility, the motorbikes will therefore add to the mobility assets of the Police Force.

“There are certain locations one cannot go with vehicle, motorbikes like these ones will help the police to reach the last mile to the most remote areas, and provide hope to the people, give the people sense of security ” he maintained.

The honourable vice president admonished the police to use the motorbikes judiciously.

Vice President Jalloh assured the Chinese Ambassador of the best utilization of the bikes, noting that the bikes will add to the mobility asset of the police to reach farthest communities to fight crime and provide security.

The Inspector General of Sierra Leone Police Michael Sovuladescribed the donation as a gesture emanating from the partnership between China and Sierra Leone. He said that the bikes will be sent to far reach police stations in the country, to establish hope and feeling of security by the community people.

The Chinese Ambassador to Sierra Leone Hu Zhangliangstated that the motorbikes were donated to support the work of the SLP, so as to help fulfill its mission in law enforcement, which he considered necessary to the peace and development of society. He lauded Vice President Jalloh who doubles as Chairman of the Sierra Leone Police Council for his suggestion that has led to the donation of the bikes.

China and Sierra Leone, Ambassador Hu Zhangliang said have enjoyed a cordial relationship for over 51 years.

“We are convinced that under the strong leadership of both President Xi and Bio, China and Sierra Leone’s bilateral tie has reached an important consensus”, he concluded. The donation ceremony took place at the headquarters of the Sierra Leone Police, George Street in Freetown on Tuesday 14th June, 2022.