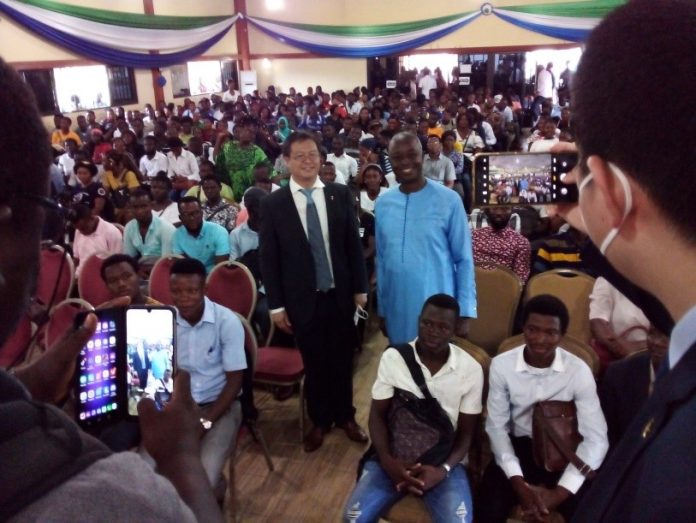 Deputy Chinese Ambassador in Sierra Leone, Li Xiaoyongon has donated 2 public address systems and accessories, projector, laptop computers and teaching and learning materials to the Students’ Union Government of the Milton Margai Technical University (MMTU) at an impressive ceremony at the Great Hall of the Goderich campus in Freetown.

Mr. Li Xiaoyong described MMTU as a great university with brilliant students who are the future leaders of Sierra Leone, acclaimed the excellent relations between Sierra Leone, Africa and China recalling that some 40 years ago China was poor and struggled but never gave up to decide its own destiny to gain independence and prosperity.

He revealed that the belt and road initiative is to help other countries and China itself stressing that the future is in the hands of students, that all must do more and together to advance MMTU, observed that China produces a lot in the world, that now is the time for the 54 African countries to develop as they are the future of the world and called on African countries to produce other professionals to advance the continent.

The Director of Political Affairs in the Chinese Embassy commended the Students’ Union for the initiative to approach them for support in March this year and appealed to students to discontinuance the western media like the CNN and BBC propagandaaccusing China of human rights abuses in Hong Kong, Taiwan and exploiting Sierra Leone’s marine resources as well as violating its labor laws.

He asserted that western countries do not want the development of China and as such undermining its cooperation with Sierra Leone and other countries.

He concluded that he is optimistic that the items would be judiciously utilized.

Vice Chancellor and Principal of MMTU, Dr. Philip John Kanu disclosed that the University has benefited immensely over the years from the Chinese government especially in the area of capacity building and assured that the items would be judiciously utilized to improve both teaching and learning outcomes.

He articulated that MMTU has very cordial ties with China, especially capacity building for lecturers (Masters and PhDs) and award of scholarships to pupils, that China has invested in MMTU recalling the deployment of a Chinese medical team that treated both pupils and the community, sent experts to train pupils in arts and crafts and underscored that as a new institution they need a lot of support in the Practical and Performing Arts Department reiterating that Chinese graduates are impacting  the country in all areas and assured that the items would be prudently utilized.

Earlier, the Dean of Social Sciences at MMTU, Ishmael Kebby welcomed the Chinese delegation, enlightened that the diplomatic relations between China and Sierra Leone has lasted for over 50 years and has continued to grow stronger and stronger affirming that the donation is another milestone in the history of the two countries.