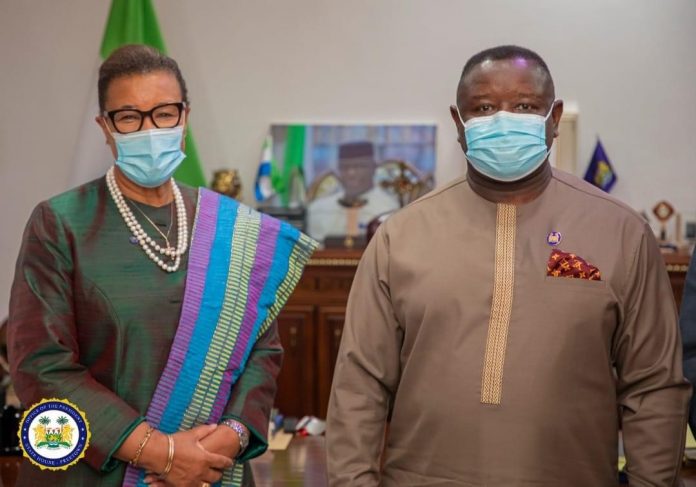 Secretary General of the Commonwealth, the Rt Hon Patricia Scotland QC, has paid a courtesy call on President Dr Julius Maada Bio where she also commended the many steps his government has taken to curtail the spread of Coronavirus in the country.

As head of the Commonwealth Secretariat, the central body that has served the 54 member nations since its establishment in 1965, she is responsible for representing the Commonwealth publicly.

Madam Patricia Scotland said she was deeply honoured to be in Sierra Leone and to engage so many stakeholders in the country, while thanking the President for making time to see and meet with her during the difficult circumstances of the Coronavirus pandemic.

“Mr President I must commend you and the Health Ministry for the steps taken so far to keep the country safe during this pandemic. Commendable is the low rate of the spread of the disease. I also want to commend and congratulate you for what you are doing for women since you became President. Commonwealth will continue to work with Sierra Leone to achieve the SDGs,” she noted.

The Rt Hon Patricia Scotland QC is the 6th Commonwealth Secretary-General. She was born in Dominica and was their candidate for the post at the Commonwealth Heads of Government Meeting (CHOGM) in Malta in 2015. She is the 2nd Secretary-General from the Caribbean and the 1st woman to hold the post.

In his response, President Dr Julius Maada Bio thanked the Secretary General of the Commonwealth for her visit amid the Coronavirus, saying that Sierra Leone always had a good working relationship with the commonwealth.

He noted that the commonwealth is a relevant actor to the development of the country and that they had always been helpful to the country.

President Bio assured that his government was genuinely serious about developing the country and to lift the people out of poverty, in order to make Sierra Leone a progressive and liberal nation.

“We remain grateful to the Commonwealth for the technical support we look forward to a great Commonwealth. Thank you very much,” he concluded.