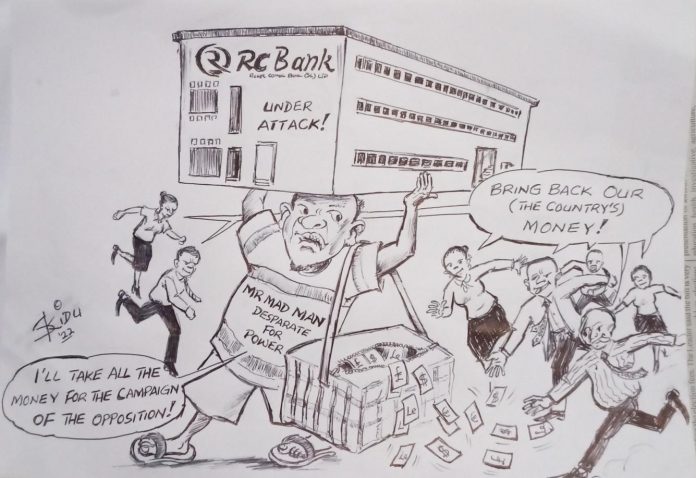 What has become very clear for all to see is that all the troubles at Rokel Commercial Bank have been the machinations of a criminal cartel that are opposed to change and development in the institution.

They are worried because their source of making fast money has been plugged and several changes in the managing structure effected that had rendered their criminal enterprise dead.

Sources in the institution revealed that certain individuals, who use to benefit from plundering the bank’s resources, which led to its poor performance, no longer hold the positions they were in, as a result they could not manipulate the figures as before.

Among such individuals is the former head of treasury, who had been making huge money from his activities. It was also disclosed that after being removed from that section, he became aggrieved, and in collaboration with other like-minded individuals, have been orchestrating a series of negative things against the institution.

Unfortunately, under their tenure in the respective positions held before the transfers, they were unable to make any significant impact, as the Bank recorded unprecedented loss, leading to many customers leaving the bank for other financial institutions. Their arrogance and disrespect for customers were openly displayed, and it was not surprising that the institution made a huge loss.

This situation resulted in the government installing a caretaker administration to handle the affairs of the Bank.

However, a new management was formed in 2017, which saw the need to transform its fortunes, and today, the Bank can be reckoned among its peers as one of the leading financial institutions, if not the leading in the country.

With a determined Management, desirous of making a difference in the sector, a complete overhauling of the system was done. Staff were sent on training, management changes were also done to ensure effective service delivery. New products were developed and implemented, which eventually saw many who had left the bank, returned to their favorite financial institution.

To further increase financial inclusion, in line with the vision of President Bio, several outlets and branches were opened across the country, and under-banked communities now have branches, like Bonthe, Kailahun Wilberforce etc, whilst new products like Rokel Simkorpor, Keke Account, etc were also introduced.

As the world has gone digital, and also in fulfillment of the President’s promise that Sierra Leone will not be left out in this fourth revolution (Digital Revolution), the result-oriented Managing Director embarked on digital banking, introducing customer friendly products, with the aim of making banking easier.

In 2021, whilst putting the finishing touches to his digital banking system, the Management announced that this year they will go full digital and customers will be able to access their accounts and do business easily with their phones in the comfort of their homes and offices.

To make this a reality, the bank signed a MoU with a mobile company, whereby customers will be able to access their money through the mobile money system of the company and can do all sorts of transactions that they do in the bank, by simply using their phones.

Thus, customers doing business in remote areas are now able to pay for goods, pay bills, taxes and other services through their phones with ease.

It was observed that the choice of mobile money was deliberate, as it has a huge customer base and agents of mobile money across the country, where RCBank customers can easily access their cash, and also tap on the various services that that company offers, like paying bills, buying fuel and other goods from supermarkets etc.

Not satisfied with this development, RCBank had also engaged traders on the use of the Rokel Simkorpor to reduce the amount of physical cash transfers they do with their customers. With all these moves, the banking hall has only remained for those customers who simply want to interact with their bankers.

Amidst these challenges, it became easier for customers to know their balance in the accounts at any given time, thereby reducing the possibility of being robbed of their money by a cunning criminal cartel in the bank.

Amidst all these, it is easy to see why the cartel could be disgruntled and would stop at nothing to change the way things are going. These developments had resulted in the bank making huge profits that have been lacking for decades, due to mismanagement by the criminal cartel.

Today, the Rokel Commercial Bank has been awarded numerous awards for its contribution to the development of the country and the industry, and with it, increased the country’s ranking internationally.

The Bank has been able over the last few years to make substantial profit and has been able to pay dividends to the government, which is its prime shareholder, and also to other shareholders.

Jealous of the progress made by the Head of this efficient and hardworking Management with integrity, in turning the fortunes of the Bank around, these individuals are bent on wrecking the good image that the institution has got by throwing spanners into the works and undermining the gains made so far.

But their antics will not deter the progress made, nor dent the enthusiasm of the management to continue with its development drive. This individual is so desperate to head the Bank to the extent that, he now work with other frustrated person, who now engaging in blackmailing decent people in society, just to solicit money after he was turned down for the position of a policy analyst at state house, a job he desperately needed, but the government has no confidence in him.

But they will surely fail and their nefarious acts will be exposed noon. Names of these dangerous individuals will be published in our subsequent editions.

Previous article
President Xi: Anyone who blocks others’ way will only have his own path blocked
Next article
Aftermath of August 10 2022 insurrection:
Business