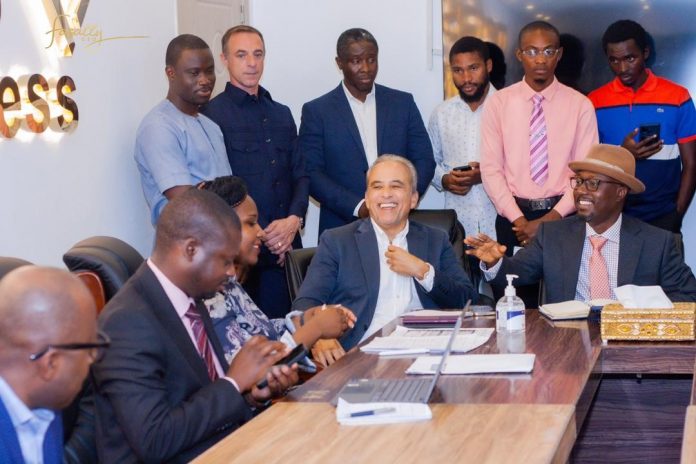 The President of the Diamond Exporting Company Sierra Leone, Fasally Tarawally, on Tuesday 18th October 2022, hosted delegates from the Kimberling Process Certificate (KPC) company in order to appeal to the government of Sierra Leone, to lower tax rates for diamond exporters like neighboring countries in the sub-region.

In addressing the delegation, Fasally Tarawally, acknowledged that it’s the duty of Kimberling Process to review their counterparts in Sierra Leone on Kimberling Process certificate, import, export regime and systems of internal control, self-regulation, and statistics.

He further said that if such actions are taken it will discourage smugglers from taking the countries precious minerals out of the country to other neighboring countries. He emphasized that the industry is doing fine because there is a strong bond of trust that exists among miners, dealers, and exporters.

Fasally Tarawally underscored that fair prices, proper service, and good relationships have attracted investors into the country – and he noted that most diamonds leaving the shores of Sierra Leone are unique and of high quality. He maintained that the Diamond Exporters Association is contributing greatly to the country’s economy and development of Sierra Leone.

Mr. Tarawally concluded by assuring the KPC delegation to Sierra Leone that they have partnered with the government to address the fake certificates, fake licenses and counter illicit mining as well.

The KPC delegates acknowledged the warm reception given to them by the president of the diamond exporters association. They further explained that there are several concerns relating to illicit mining, smuggling, and processes of acquiring export certificates, as well as fake certificate among other things.

The head of the KPC delegation Review Team, Dr. Engineer Mercy Manyuchi, disclosed that they are pleased with the legal and institutional framework relating to Sierra Leone. She went on to say that the legal framework of everything country is the very fabric on which transparency and accountability stand – and it also paves the way for smooth transactions with the international community.

Director of Precious Minerals Trading, National Minerals Agency Mohamed Bah, in his brief statement said that government has put measures like having a Kimberling certificate to export diamond which he noted has discouraged smugglers from their illegal practice greatly.

He further said that there has been an improvement on the fast-tracking of export certification for exporters.

Director Bah also noted that efforts have been made to increase annual gross profit of mining companies to one percent (1%), to improve the business transaction in communities, and to ensure that community development agreements are fully implemented.

The meeting climaxed with pleasantries and an agreement to pursue a targeted goal.