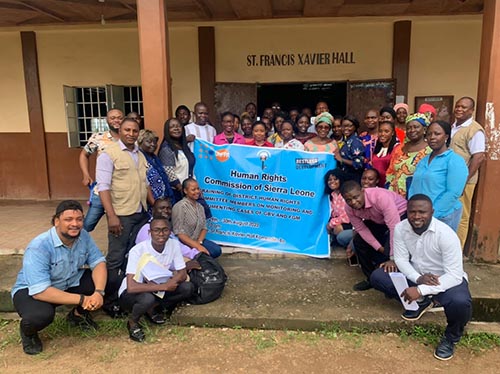 District Human Rights Committees are a body of trained individuals that monitor the implementation of international, regional, and local instruments, laws, and policies of human rights in their respective districts.

Over the years, they have been a strong pillar of the Human Rights Commission of Sierra Leone, performing a critical role to monitor human rights in the districts and relating with the Commission.

In order to strengthen their role in monitoring sexual gender-based violence, HRCSL has trained thirty-two (32) Members from the DHRC in Bo District at the St. Francis Xavier Hall with support from United Nations Population Fund (UNFPA) through Restless Development.

According to the Family Support Unit, Bo District has recorded an increase in sexual gender-based violence, especially among minors. Such GVB cases include sexual penetration, sexual harassment, and wife battering.

From their lived experiences working in local communities, participants raised very critical issues about gender-based violence with graving consequences mostly for women and young girls. They recommended sustained advocacy and radio discussion on the issue and that such training should be conducted in areas or communities where sexual and gender-based violence cases are prevalent.

The HRCSL’s Director of Gender and Children’s Affairs, Madam Gloria Bayoh highlighted the following as some of the ways to intervene or mitigate gender-based violence in communities; public education and awareness raising on the issues and also using the referral pathways which the Ministry of Gender and Children’s Affairs and other government institutions and partners have put together, which is reporting SGBV cases to community-based organisations, who will then take it to the police.