The Political Parties Regulation Commission (PPRC), has directed the... 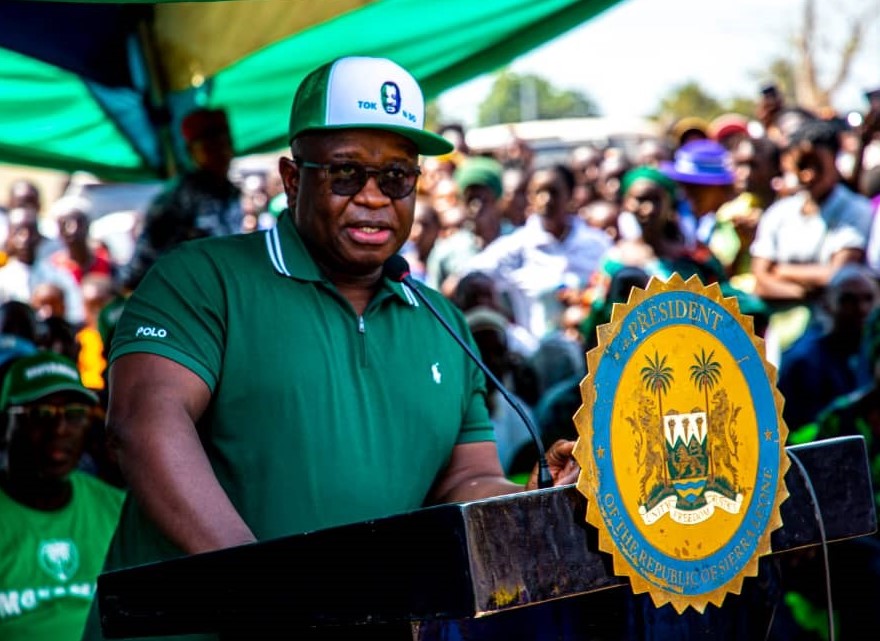 His Excellency President Dr Julius Maada Bio has assured the people of Moyamba district that he will continue to keep the promise he made to his late mother’s request not to forget her home, Moyamba district.

“My mother, of blessed memory, hailed from Moyamba district and I can recall that when she was on her death bed, she once told me as a child, ‘Don’t forget my home’. This is another chance for the people of this district to show how committed they are to continuing to provide free quality education, infrastructure, electricity, and other rights-based opportunities”. President Bio stated while speaking during his four-day tour of Bradford, Rotifunk, Bauya and Moyamba town in the Moyamba district, which is expected to complete today 23rd January, 2023.

“My presence here today was to touch base and extend my thanks and appreciation to everyone in the district, especially the children, who are the most important and valuable assets in our nation. They are our future because tomorrow they will be in charge of the affairs of our country,” he said, adding that if they failed in their responsibility as leaders of the nation to ensure that children achieved their full potential, they would not develop as a nation.

“I am happy to be here today. I am glad at the turnout of the youth, the women, the children, and all the district stakeholders who showed up to receive me in the district. I am happy with your level of organisation for my visit.

“The children are our future, and with the investment my government has made in them, they will become our lawyers, medical doctors, teachers, presidents, ministers, and directors, among other prominent persons in the nation.

“Most of us here present today should have become doctors, lawyers, ministers, journalists, and directors. But because of bad political leaders during their time, some people were unable to achieve their full potential. My government doesn’t believe in talking because we want to. So, whenever I make a pronouncement, I will work towards ensuring I deliver on it.

“So, today, I want to inform you that talks are ongoing for the commencement of the road that will link Moyamba District with the rest of the country, but that will only come to fruition during my second term of office,” the President assured.

He emphasised that the only way out of poverty for the country was for children to be educated, and, therefore, called on all Sierra Leoneans to not only focus on his governance strategy but also to have faith in his leadership style for Sierra Leone’s development.

This is another chance for the people of this district to show how committed they are to continuing to provide free quality education, infrastructure, electricity, and other rights-based opportunities.

In her statement, First Lady Fatima Maada Bio told the gathering that there was no need for teenage girls to think about men because there was time for everything and that would be reinforced that after visiting the people of Moyamba District with her husband, His Excellency President Dr Julius Maada Bio.

“So, the fact that Moyamba district is now one of the most stable places in the country, means that the young people are in agreement. Thank you for keeping that peace. I want to assure all those present here, today, that what the President has done since 2018 is very small when compared to what he is intending to do after his re-election in June 2023. That is when he will come out swinging with everything he has in store for the country” she said.

Paramount Chief for Bumpeh chiefdom, PC Charles Caulker, acknowledged the presence of the entourage and thanked the President for the tangible development in his chiefdom over the last four years.

“The Mabang bridge did not only connect Moyamba with the rest of the country, it has opened up our district, reduced traveling time, reduced sea accidents, and also ensured that our farm products will no longer perish before they are taken to the market,” the traditional leader noted.

Honourable Veronica Kadie Sesay of Constituency 094 recalled that: “This district used to have the highest number of teenage pregnancies. But with the introduction of the Hands Off Our Girls campaign by the First Lady, cases of rape, sexual assault, and all other forms of violence against women and girls are a thing of the past”.

“This government has approved 1,543 teachers in the district, 404 schools, 265 culverts, functional industrial boreholes in the chiefdoms, the construction of 210 kilometers of roads by SLRA, the construction of 3 car wash centres, 10 boats for youth in riverine areas, 95 percent completion on the ongoing Moyamba electrification project, and the cultivation of 75,000 hectares of farmland,” he highlighted.