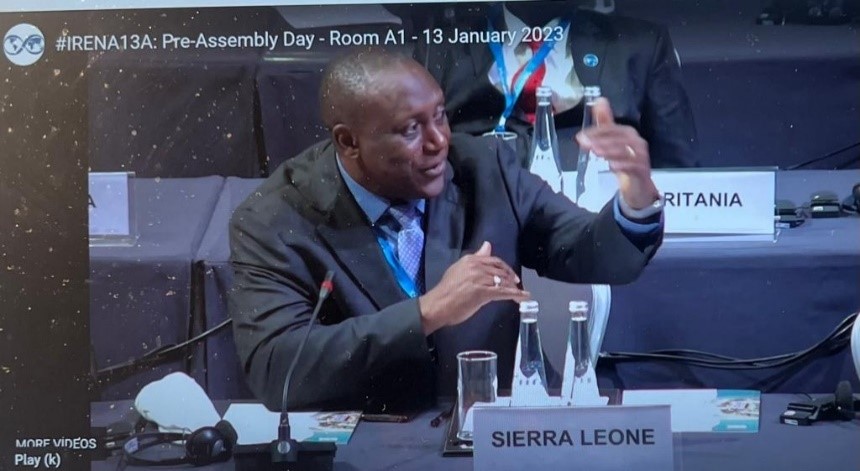 Honourable Dr. Kandeh Kolleh Yumkella is among hundreds of high-level dignitaries at the Thirteenth Annual Assembly of the International Renewable Energy Agency (IRENA) which is taking place in Abu Dhabi, United Arab Emirates.

The Assembly brought together Heads of State, Ministers, heads of multilateral agencies, the private sector and civil society organisations to take stock of the global energy transition where decision makers agree that much more work is needed to accelerate the rate of progress needed to achieve the SDG-7 goal and keep.

Hon. Yumkella who has been invited to help shape discussions on the global energy transition and climate change noted that legislators have a critical role to play to support governments in their own countries to accelerate the energy transition.

“We must reflect on the critical issues in the renewable energy space and ponder on policies and acts of parliaments in the deployment of climate friendly technologies and create the enabling environment for moving our countries forward towards the global energy transition,” he said in moderating the session: Ensuring a more sustainable energy transition through international cooperation.

In his keynote address, Honourable Sidie Tunis, Speaker of the ECOWAS Parliament called on parliamentarians to take advantage of the new era of parliamentary diplomacy and to honourably play their roles as the issue of hydrogen is timely and has the potential to offer a host of solutions.

He also highlighted efforts that have been taken in the ECOWAS region to support green energy.

Hon. Yumkella challenged his colleagues to ask themselves what key policies must we pass in parliament to support our countries towards the energy transition?

“How can we help promote international cooperation initiatives to further develop the industry?” The global energy transition must benefit our people and continent, he underscored.”

A strong supporter of gender empowerment, Hon. Yumkella was also a panelist at the Solar Photovoltaic (PV) – A Gender Perspective event.  Called upon to speak specifically about human rights versus empowerment, he stressed the importance of having women at the centre of decisions.

“We need the participation of women in designing the technologies and their voices in enacting public policies,” he said.

In most countries, he noted that cultural biases affect women’s participation across the board. “Women,” he said “don’t own assets by themselves and are also often excluded from making economic decisions for the community. These are issues that he called for all to help tackle to ensure women’s rights are respected.

Citing Sierra Leone as an example, he informed the gathering that parliament has passed a quota requiring 30 percent quota for women and called for gender perspectives can be integrated across the energy industry and in particular solar PV.

To ensure the global energy transition, the progress must be rapid, inclusive and must leave no one behind.

“The private sector has a role to play. They have the solutions,” said Hon. Yumkella as he spoke at the IRENA session on Public-Private Dialogue: Just and Inclusive Energy Transitions – Social Dialogue, Skills, and Decent Jobs for All.

The event which brought together governments, labour unions and the private sector sought to discuss what a just transition means.

“For Sub Saharan Africa,” said Hon. Yumkella, “the issues are economic diversification and structural change in our economies as well as the continent’s growing population.”  Africa’s population is projected to grow to 2.3 billion by 2050.  “We need to look at job at a utility scale and grid expansion and the flexibility to be able to industrialise and looking at the value chain and the required skills needed.”

On the issue of gas, Hon. Yumkella further noted that Africa’s transition must include gas. “thirty percent of recent discoveries are from Africa. Our transition to renewables in 2050, therefore must have a pathway to gas, the skills required, the investment package and the structuring of deals,” he underscored.

For Africa, the challenges are different from country to country. Green hydrogen is a new space and a new product and requires capacity building.

Renewables is required at the gigawatts scale to make it happen and ensure the transition is just for everyone.

Following the IRENA Assembly, Hon. Yumkella travelled to Saudi Arabia to perform the Umrah, an Islamic pilgrimage undertaken by Muslims any time of the year.