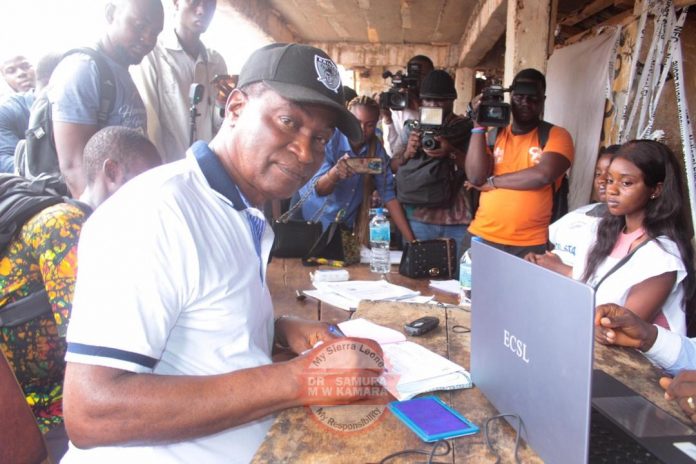 Former flagbearer for the main opposition, All Peoples’ Congress (APC) Dr. Samura Mathew Wilson Kamara has appealed to registrants to be peaceful, refrain from violence and exercise patience as they queued up to be registered to vote in next year’s elections.

He was speaking to people at the MAFA Voter Registration Center in Lumley where he was accompanied by his wife Mrs. Elizabeth Massah Samura Kamara to be registered earlier yesterday September 7, 2022.

Dr. Samura Kamara after successfully being registered thanked the ECSL staff at the registration centre for   their national service to the state.

He also thanked the people on the queue for their exuberance in wanting to exercise their civic duty, while appealing to the people to exercise patience and restraint, be peaceful and refrain from violence. He said: “It is a must that all voters be registered in order to be eligible to participate in the forthcoming elections”. Dr. Samura Kamara.

He called on the Chief Electoral Commission and the ECSL to be timely in addressing the numerous challenges that are on the ground especially the issues of the first-time voters, and the use of one registration machine at a center, coupled with the slow pace of the process.

He further called on ECSL to ensure that every Sierra Leonean that has or will reach the voting age on 23rd June, 2023 be registered in order to be eligible to vote come June 24, 2023.

Voter registration he concluded is a very important exercise and in fact a key determinant for any political party to win elections.