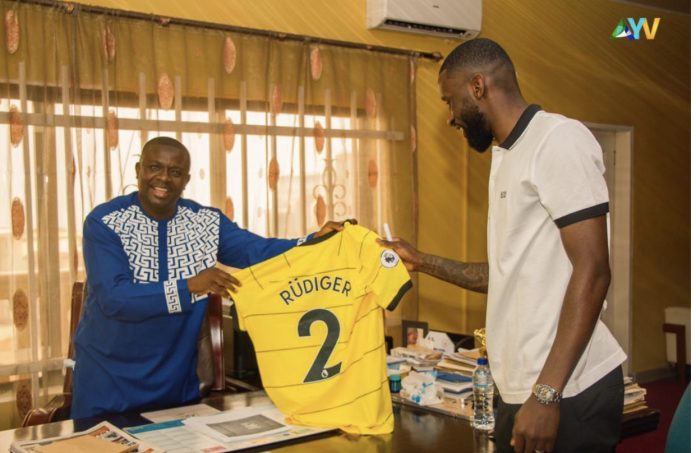 Rudiger is one of the most coveted defenders in Europe right now as his contract with Chelsea expires in June 2022, and he is free to discuss terms with other clubs on the continent.

During the meeting where the two football chiefs discussed issues relating to the development of football among other issues, Ruediger presented his autographed #2 Chelsea FC Jersey as a gift to the E.E Lions chairman.

It can be recalled that the appointment of Ambassador Navo to provide quality leadership for the East End Lions Club has rejuvenated hope in the minds of football fans across the country over the future of the game.

Chelsea defender Antonio Rudiger pledged his support behind the Sierra Leone football team for this year’s Africa Cup of Nations.

The German, who is out of contract at Stamford Bridge in the summer, is involved in the BigShoe organisation in the country which has helped children with club feet get operations to remedy the problem.

Rudiger’s family is also from Sierra Leone and his mother Lily was forced to flee the country in 1991 when the civil war began.

She subsequently settled in Germany where she gave birth to Rudiger hence why he represents Germany at an international level.

His work with BigShoe has also seen him send a Chelsea shirt with his name and number on the back be sent to each and every child the project has helped so far and there is no intentions of it stopping anytime soon.

“I am very connected to my second home and we have more projects planned.” Rudiger said, adding; “My first visit to Sierra Leone five years ago taught me above all that everything that we supposedly call a ‘problem’ here in Europe is not really a problem at all.”