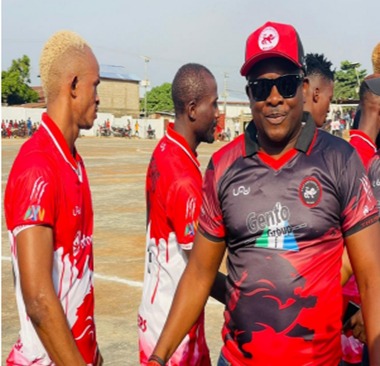 Ahead of the Mighty Blackpool vs East End Lions fixture, a match many Sierra Leoneans considered the Biggest Rivalry in Sierra Leone Football, the Chairman of East End Lions Football Club, Amb. Anthony Navo Jr., has on behalf of the Club’s Executive offered a whooping sum of Le50 million (Old Leones) to the Technical Team and Players if they defeat their greatest rivals in the Sierra Leone Premier League top of the table clash tomorrow Sunday at the Parade Grounds.

Having returned from the United Kingdom last night and with great optimism to witness the two most successful clubs clash for the first time this season, Chairman Navo Jr. wasted no time in getting in touch with the team.

He reaffirmed the Club’s dedication, commitment and trust in the squad.

“I believe there has to be that connection between all of us (officials, players and fans). We’re all one family. My responsibility is to maintain that feel-good factor and commitment that we’re all in this together. I try every time to be in touch with everyone as much as I can, in order to keep the bond and connection effective” he remarked.

In his closing statement, the Chairman made the offer of Le50,000 million (Old Leones) for a victory against arch rivals Mighty Blackpool, on behalf of the executive.

“We have faith in you Guys. Go out on Sunday and make us and our families proud. You guys know our aims and objective for this season, and from a management stand point, we are ready to give you all the necessary support as always to ensure that we attain our goals for the campaign. Let’s start 2023 with a bang guys. I wish us all the very best guys. See you all on Sunday” he said.

Head Coach, Francis Zappa Koroma and Club Captain Kemson Fofanah thanked the Chairman and the Executive for what they described as a timely motivational gesture and promised to give a performance that befits the club and make everyone proud at the end of the day.

Both players missed the home draw against Diamond Stars as a result of injuries sustained against Kamboi Eagles in Kenema.

Ahead of the clash, Zappa explained that he is happy to have S.S Kargbo and Abdul Nyamekye back in time for this encounter, citing that their quick recoveries are a massive boost to the squad.

“Sulaiman and Abdul bring a lot of energy and experience in the team and they are players built for these fixtures. I am very delighted to have them for this match. We have prepared well and look forward to make the management and fans happy on Sunday by
His Grace” – Coach Zappa said.

“I think from a physical perspective it’ll be two teams that give their all. We’ve followed Blackpool’s readiness for this game. They give everything, they’re very committed, they’re playing well and leaving everything out on the pitch. So, we do anticipate a very fast-paced game between two good teams.” he continued.